Clay Melts in the Heat 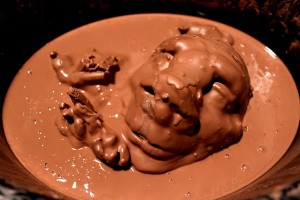 We interrupt the relative awesomeness of a three game winning streak and the it-never-gets-old tribute to the 2004 team to talk about Clay Buchholz. The guy is sucking hard right now and the DL is the best place for him, the team, and the sanity of the fans. The guy has become a walking excuse machine.

Just a month ago, Clay and a few of his buddies had a sleepover at Fenway so they wouldn’t have to get up early and get through traffic for the early Patriot’s Day game. Buchholz proceeded to get roughed up in that start.

Fast-forward to another holiday weekend, another day game, another poor start, and the human excuse factory springs to life. Let’s break it down:

Toucher and Rich took a more scientific approach to the situation, check it out here.

And after all this, the official word is a hyperextended knee after landing wrong after a pitch. Sounds more like the guy just can’t get his shit together. Remember when Derek Lowe had trouble pitching day games?