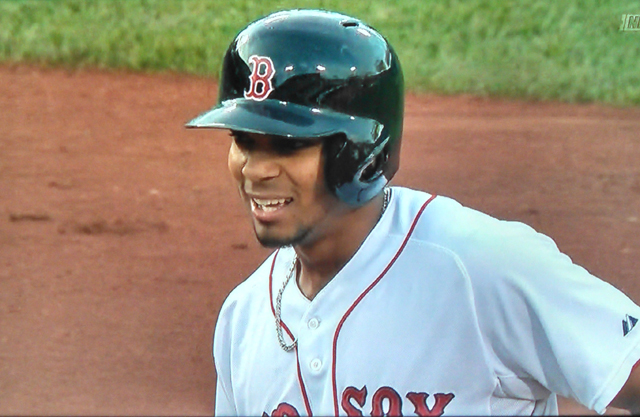 Last Friday, I was pretty much writing the 2014 Red Sox off, quietly packing away my foam finger and seeking refuge in my 2013 World Series DVDs. One week later, everything’s changed. The Red Sox have won four in a row and are looking something like the team on a mission they were last year. They’re still five games under .500, still trying to pull themselves from the lower half of the AL East, but it looks like they’ve turned a corner.

Perhaps one of the strongest signs that change is in the air came in the ninth inning. Down a run, and facing one of the game’s best closers in Craig Kimbrel, Jackie Bradley Jr and Brock Holt earned walks, setting up a game-winning hit from Xander to end it. A week ago, JBJ and Brock probably would have struck out or been attacked by a gibbon on their way to the plate or had some other cruel and humiliating fate befall them. But when things are going your way, they go your way.

Not that the Braves didn’t do their best to give this one away. They made numerous gaffes and miscues; enough, in fact, to earn the Upton Brothers a “Best Comedy Duo” nomination in the 2014 People’s Choice Awards. But we have to give the Sox their props. Peavy held in for eight strong innings, guys like Pierzynski came through when least expected and Holt and Bogaerts went a combined 6-for-9 in the top two spots.

Seeing the way Xander has been hitting the ball of late, I almost wonder if the Sox signing Drew was a purely motivational exercise. And Brock’s bat isn’t making the signing look any smarter; trading his hot bat for Drew’s 0-fers might cause a bloody coup in the Fenway stands. Last night, those two made the top of the order look potent and just plain goddam fun again and I say you ride the hot hand as long as it keeps delivering.

Speaking of which, it will be interesting to see if the Sox can keep it up against the Rays this weekend. Last week, we were spiraling and the Rays were reversing their fortunes, sending us to the basement. Today, we’ve won four straight and they’ve lost three straight. Throw in the bad blood from last Sunday’s game and you’ve got the potential for mayhem. And sometimes, mayhem can be awesome. So long as we win.