NESN Presents: The Adventures of Ellsbury ‘n’ Elf, Episode 64-B, “Because Nothing Heals Like Beer” 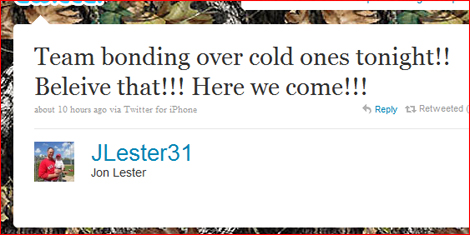 Man, nothing like a few brewskis with the guys.

Yes, we are fortunate for these opportunities to imbibe and commiserate regarding our current malaise.

Malwhat? Buddy I’m just here for the free beer. I tuned y’all out hours ago.

Besides, I think we know what our problem is. ::cough:: daisukeandlackey ::cough::

Come on. It’s easy to point fingers. The question we should be asking is what can we do to help our teammates through their struggles.

Are they getting enough fudge in their diets? That’s where I’d start.

I remember when Daryl would piss me off, the first thing I’d do would be–

THAT’S ENOUGH OUTTA YOU, OATES. You drink and keep your mouth shut, got it?

I read about this magic healing ointment that works wonders. Of course, it needs to be applied directly to their testicles, so we’d have to draw straws. But—

We could just kill them.

I’m not so sure. Did you say… kill them?

Are you speaking from experience?

I don’t feel compelled to answer that.

That’s just crazy talk. Do we really want blood on our hands?

Maybe not, say, Buch’s or Lester’s. But Daisuke’s… I might have to think about that.

My sense of humor has long since been brought out to shed and beaten soundly. I just need to know if you’re serious about taking care of these… problems.

As one of the elder statesmen of Red Sox Nation, I insist that there must be a better way.

Maybe, maybe not. A lead pipe to the legs? Kneecaps get better, people come off the DL. Arsenic in their Corn Flakes? If you don’t use the right amount, it’s just a nasty case of the shits and one missed start. You want your World Series bonus hanging on Lackey going 8 strong against the Phillies?

Fellas, I think we may be acting hastily. We’re only 11 games in. I mean, what if they get better?

Sure, they might get better. And, if, say, Bard gets better and Jenks gets better… that leaves us with one bullpen dweller we could do without as well. If you catch my drift.

I’m having none of this. We’re a team. We’re the Boston Red Sox for chrissakes. What’s next? Someone disagrees with Tito so we lace his Bigelow?

I say we all just man up and carry the guys who are struggling. God knows there’ll come a point this summer when we need ‘em to carry us. That’s called being a team, motherf%$kers.

Alright, fine. Majority rules. But suspecting you might go the peaceful route, I secured an alternate outlet for my pent-up rage.

The Adventures of Ellsbury ‘n’ Elf: All Verlander, All the Time