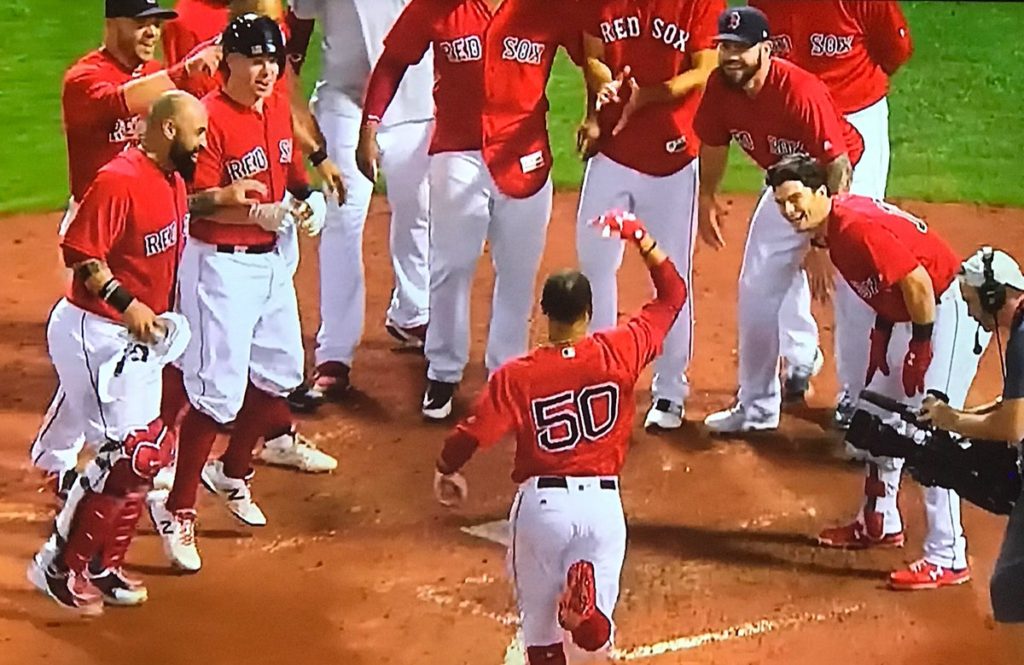 Alright you know that this headline’s misleading because any discussion of the greatest Red Sox player ever starts with Ted Williams, David Ortiz or Eric Hinske. But Mookie Betts is damn near close. First he transformed from a second baseman to a phenomenal outfielder, doing shit like this one the regular:

Now, before our eyes, he’s become one of the best hitters in baseball, currently leading every other player in the league in BA, SLG and OPS. And last night, he added to his legend, cranking a walk-off home run to help the Sox come back against the Twins and win their 73rd game.

It was just another example of Mookie turning Fenway on its ass, and it’s clear that his teammates approved:

I want the film rights to Brock and Benintendi’s celebration. #pals pic.twitter.com/OWP5TJa3PD

I hate to break this to every other team in the bigs, but if you’re trying to stop a Red Sox team that includes Mookie Betts, you are, quite simply, screwed. Just shut it down now and focus on 2019 because there’s no way a team with Mookie as its heart and soul is goin’ down. No freakin’ way.

Never mind the fact that last night we had to come back against the sub-.500 Twins and that Craig Kimbrel blew the save setting up Mook’s heroics. I’m here to focus on the positive, at least until such time that it becomes more profitable to focus on the negative. I will say that what surprised me the most about last night was that this was Mookie’s first walk-off home run. The guy’s hit 25 this season and over a hundred in his four year career, but that was his first walk-off?

It makes no sense, and yet it makes all the sense in the world. We’re on Mookie Standard Time, people. Sit back and enjoy.