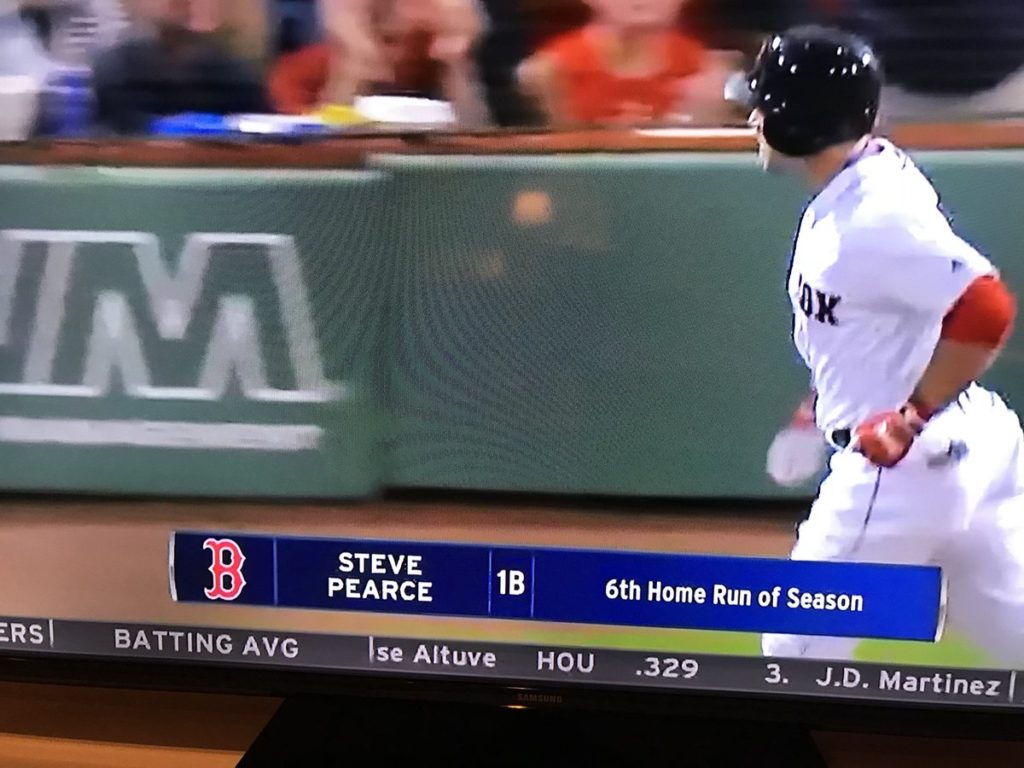 If you only have time to read seven words today, let me encapsulate last night’s game thusly: Steve Pearce is a Bad Ass Motherfucker.

If you have time for more, read on.

It might have been easy to cash out after Brian Johnson handed the Yankees a 4-0 lead by the second inning. You could almost hear the hordes of New York fans exclaiming that all of the Red Sox’ success this year hinges mightily on the fact that they haven’t played the Yankees every game. Hell, Brian Cashman himself went on record as saying the Yanks are the only team that can “damage” us.

But the Sox chipped away, then went full scorched Earth on the Yankees, delivering unto them an eight run bitch slapping in the bottom of the fourth. Over the course of the game, the Sox belted 19 hits, scored 15 times and generally flattened the Yankees to corn meal.

Leading the charge was none other than… Steve Pearce. Yes, the journeyman fielder who barely caused a ripple on our collective consciousness when the Sox picked him up. Last night, Pearce laid a beating upon his former team, cranking three home runs and showing little or no respect for the Yankees. JUST LIKE I SAID IN THIS TWEET:

STEVE PEARCE WITH LITTLE OR NO RESPECT FOR THE YANKEES pic.twitter.com/RFcUC2z9Ss

What makes this all so magical is that it all comes at the expense of Aaron Boone, who looked like he’d rather be having invasive surgery than piloting the team last night. Yes, I am one of those miserable bastards who still wakes up in a cold sweat haunted by the image of Boone taking Tim Wakefield out of the park, and leading the Yankees to the promised land of the 2003 World Series. We spanked the Boone-less Yanks in the 2004 ALCS, but our ultimate revenge on the twit himself has been a long time coming. And holy Christ is it enjoyable. LOOK AT HOW DELICIOUS HIS ANGER IS:

2018 has been a better revenge on Aaron Boone than I ever dreamed possible. pic.twitter.com/MH4GyR0iMq

There’s still a lot of baseball to play. I know this. I’ve been around long enough to know that you take nothing for granted in Red Sox Nation. But the world we live in today, the Post-2004 ALCS World, is a magical place unlike anything I ever experienced growing up. With the monkey off our back, we’ve evolved from the Yankees’ favorite plaything to their ultimate torturer.

Can’t say I’m not loving the shit out of it.