“Are the Red Sox Finally Turning It Around?” he Asked for the One Millionth Time 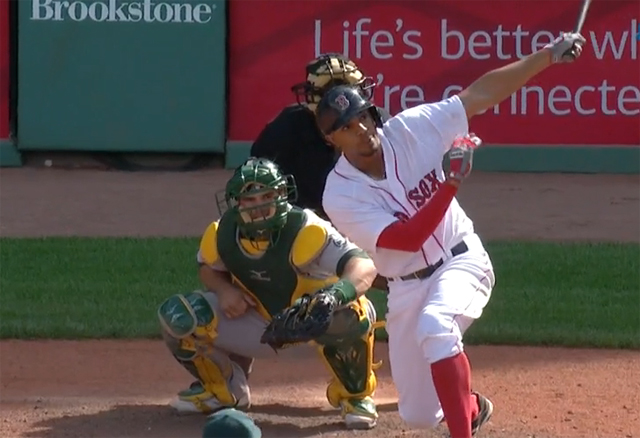 In my lifetime, I can’t even recall how many times I’ve asked that question. All I know is that two Sundays ago, the Red Sox treated us to one of the single worst losses I can recall digesting in over 30 years of following this team. Then, last Sunday, they played their best game of 2015, a dramatic come-from-behind win that featured a seven-run eighth inning.

I’m not even gonna lie: Sunday’s win got me all kinds of pumped. Not just because the of the comeback, the likes of which have been in short supply this year. What got me hyped was the camaraderie the team displayed as they battled their way back against the truly woeful A’s. Some of the best Red Sox teams of my lifetime — 2004 and 2013 come to mind — were made up of players who seemed to truly enjoy playing alongside each other. Up until Sunday, I didn’t a lot of that in the 2015 model. But there they were, as the runs started piling up, hanging over the dugout fence, cheering each other on and almost willing each other to get a ball in play.

The highlight for me was seeing the lads give it up for Young Bogie when he drove in the go-ahead run with a clutch double off the wall. I’ve made no secret of my love of all things Xander; I like what he brings to the team and, more importantly, the affable, good nature he projects. If the older players want to rally around X and show him the support that ownership didn’t see fit to during “The Stephen Drew Affair” of 2013, I’m all about it. Either way, seeing Xander get pumped up after his hit and watching Sandoval hugging him in the dugout gave me the impression that this team may start acting like one, big, symbiotic ass kicking machine. And that’s not a bad thing.

Also, call me a homer, but does it get any better than Jerry Remy’s booze- and cigarette-stained voice chortling, “Oh yeah, baby!” after Xander delivered?

Next post On the road again, on the ropes again