The Red Sox Suck. And I’m Fine With That. 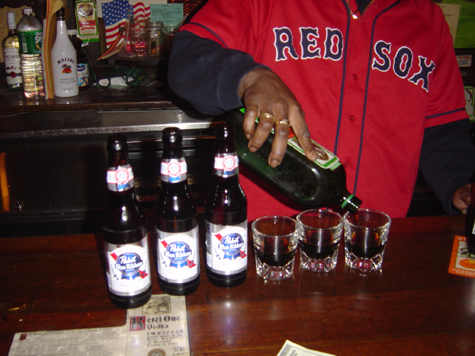 I am old enough to remember seeing Yaz and Dewey play. To remember collapsing in a heap on the floor when the ball went through Buckner’s legs. To remember saying out loud, completely sober, that Dante Bichette would lead this team to the promised land.

What I’m trying to say is that I’ve lived and died with this team a million times in my lifetime. Had my heart cut to ribbons. My spleen carved up and left to rot on Yawkey Way’s cold pavement. My nuts stomped on by the likes of Phil Plantier, Mo Vaughn, Nick Esasky, Jack Clark, Danny Darwin, Andre Dawson, John Smoltz and countless other alleged “saviors.”

I will never forget 2004 and 2007 and the most improbable of them all, 2013. But I will never let the time spent breathing the rarefied air of champions change the fact that I cut my teeth on some of the shittiest Red Sox teams imaginable. Those teams taught me the value of patience. The virtue of trust. And that a man-fro can be a beautiful thing.

Most importantly, they taught me to never be that guy — the one who expects his team to win at all costs, who accepts nothing but first place finishes, or who considers a season that doesn’t end with playoffs baseball to be a season best forgotten.

God knows watching those shit-ass teams of the post-’86/early 90s era gave me and my dad plenty to talk about. I’d even say they brought us closer. It’s surprising how fast silly, generational differences melt away when Joe Hesketh is serving up longballs to beat the motherfucking band.

This rich history, this grounding in the classics of Hobson and Houk and Walpole Joe Morgan haven’t necessarily made me a better person. But they have given me perspective.

Since those iron clad teams of 2007 and 2008, the Red Sox have sucked. Take away the 2013 World Series win, and you’ve got a team that’s finished no higher than third place and no fewer than seven games out since 2010. Today, right now, as I type this, the 2015 edition sucks, too. They’re in last place with a losing record, worst pitching in all of baseball, hitting that shows up only sporadically and a manager who, with each passing game, seems to have gotten inexplicably lucky in his first season driving the bus.

And you know what? I’m okay with that.

I like my Red Sox being some sort of fractured mirror image of my own life. Never quite being good enough. Tripping over their own feet when the big moments arrive. Looking good on paper but not remotely close to translating that into anything of substance.

Don’t get me wrong; I like winning. But I also don’t mind the frequent reminders of what life was like during the lean years. The “just wait til Butch Hobson whips these boys into shape” years. The Bret Saberhagen Reclamation Project years. The “wait til next year” years.

It’s only May. Hell, it’s early May. Plenty of time for the Sox to turn things around.

And whether we win the Series or go down in flames at the bottom of the East, I’ll be thankful for every minute of baseball we get in 2015.