Anyone But Mothereffin’ A-Rod 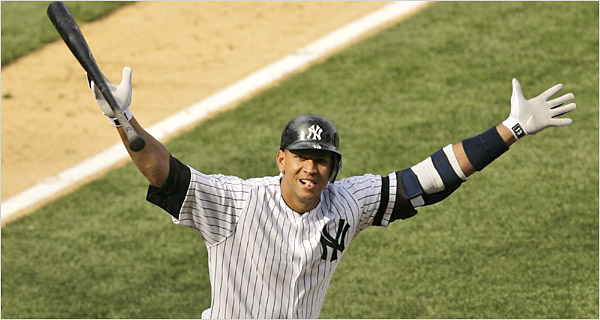 My Doctor and I have an agreement. I promise not to let the Red Sox push me to apoplectic seizures and he pretends I might actually live to see 50 some day.

So far, it’s worked. Three World Series titles in a ten year span have helped calm some of the devils inside me. But last night, when Tazawa served one up to A-Rod and that chemically-enhanced dink knocked it into the Monster Seats, I felt a true Banner-to-the-Hulk transformation wash over me.

He’s the one guy in that Yankees line-up I never want to beat us. Fuck, if that entire New York line-up went 4-for-4 with home runs and grand slams and wedgie-ing our players as they rounded the bases BUT A-Rod struck out every time he stepped to the plate, I’d call it a success. The fact that this home run actually meant something, tying A-Rod with Willie Mays on the all-time home run list, just twists the knife. I can only hope Willie’s ghost stuck a six foot tungsten bulb up A-Rod’s south 40 at some point last evening. That might make me feel a little better. Maybe.

Beyond that travesty, last night’s game was just an exercise in frustration. The Sox caught some bad breaks, most notably a Napoli double into the bullpen which, if it hadn’t gone out, would have plated a run for us. Also, some dink of a fan interfered with a ball in play, turning a Hanigan hit that might have scored a run into one that didn’t. Then there was that goddam walk of the .206 hitting Didi Gregorius to open the seventh which came back to haunt us.

I know out line-up can do some damage. All we hear about is how “once these guys turn it on, everybody’s gonna pay.” Well I want to see people start paying now. I want the Yankees leaving here like they just took a steel boot to the onions, cowering at the very prospects of ever coming back. I want fear and loathing and firestorms and all hell breaking loose every time a member of our team takes bat in hand. Just give me something to wash the memory of A-Rod’s home run trot from my brain.

Blake Swihart joins the team tonight to fill the void left by the injured Ryan Hanigan. Maybe he’ll be the spark we need.

Next post The Red Sox Suck. And I'm Fine With That.