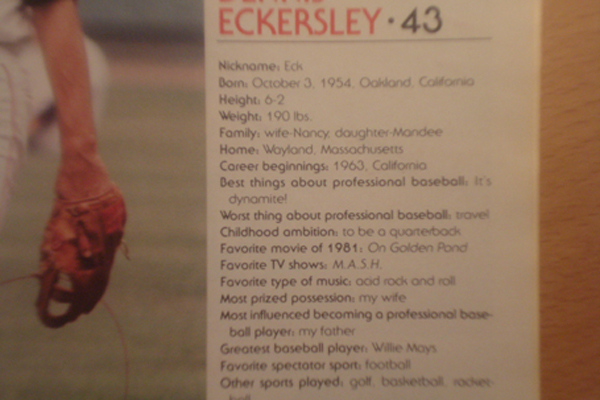 Like anyone with a rock and roll and baseball soul, I felt a little piece of me die during last night’s NESN viewer poll on the best band to come from Seattle, when The Eck had no idea who or what Soundgarden was. Distraught, and already spiraling from seeing John Lackey get shellackeyed, I sought refuge in a stack of old Sox yearbooks. And I found myself particularly taken with the 1982 edition, which subjects each player to a round of “20 questions”, asking them everything from their favorite movie to which foreign country they’d like to visit.

And it was there that I realized why the Eck was baffled by a band that peaked in the mid-90s. It’s because the guy’s a 70s soul through and through. Just look at his entry from said yearbook, presented in the photo above. When asked about his favorite type of music, the Eck proudly responds with “Acid Rock and Roll.”

I like that, because he’s showing us all the lengths to which he goes to rock out. Ordinary “rock and roll” is fine for you weekend squires whose toughest tasks involve mowing the lawn and taking out the garbage. But when you’re staring down the likes of Reggie Jackson in the sixth inning with bases packed, you need to call on the power of acid rock and roll, motherf@#ker. Otherwise, what’s the point? That’s what separates Eck from the common man. We’re just sitting here, bobbing our heads to Maroon 5, while he’s raising fire and brimstone on the back of a dragon, thrashing shit up but good.

More intriguing, however, is the Eck’s favorite movie: On Golden Pond. The f@#k? Somehow, I just can’t see The Magic Moustache finding escape in any flick starring Katherine Hepburn, so I’ll just assume he’s actually referencing some obscure Japanese flick of the same name that involves werewolves, mutant dinosaurs and an elite team of space babes from space. 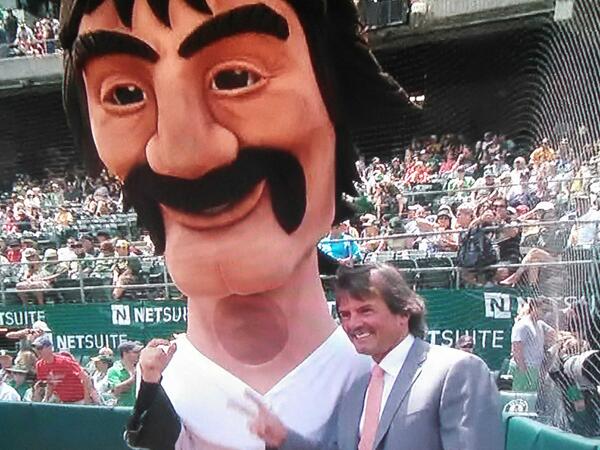 Next post Sox Bats: Coming Soon To a Milk Carton Near You