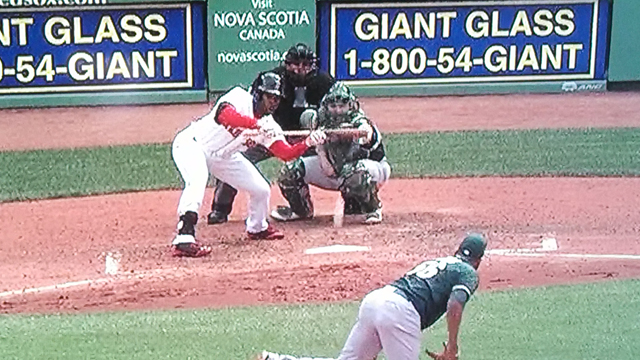 Look, my nuts are pretty strong. They’ve been through a lot of shit. And any nuts that could survive the 2003 ALCS are nuts I’d go to war with.

This season, however, you guys have been making a pretty good show of stepping on my nuts. And maybe it’s because I still possess that post-World series delirium that I allow them to get stepped on so much (my nuts are strong, but I never said they were smart). But it has to stop. For you. For me. And, most importantly, for my nuts.

Today was a textbook case of why my nuts hate you guys. Our eighth chance to get to .500. John Lackey on the hill. Coming off a couple brilliant games against the A’s that had me convinced that a corner had been turned. That .500 was gonna happen. That today would be a reminder to other teams that the Boston Red Sox are still the reigning world champs.

More of the same stuff that plagued us through April. Runners left on base. Horrifically squandered opportunities. Questionable maneuvers. And topping it all off, Jackie Bradley Jr.’s ball-crushingly infuriating inability to lay down a bunt.

This was a game that should have been ours. And the Oakland A’s certainly seemed intent on giving it to us. Last year, these were the kinds of games we chewed up like Pac-Man.

But today, Jesus. Where do I begin?

In the fifth, bases loaded, one out, and JBJ grounds into a double play.

In the seventh, we get runners on second and third with nobody out… and can’t score.

In the eighth, the potential winning run is thrown out trying to steal second.

In the ninth, AJ — whose bat has truly been on fire of late and already had a home run in the game — grounds out inexplicably trying to bunt for a hit.

In the tenth, a gift miscue by the A’s puts our leadoff hitter at second with nobody out… and we can’t score.

It should be enough that we took two of three from a team with the most wins in the American League. It should also be enough that our starting pitching, the one thing that can carry a team to and through the playoffs, is looking pretty solid.

But it isn’t. Selfishly, I wanted them all. I wanted .500, goddamit. Even with the embarrassment of riches that last year brought.

Now… back to drinking.