We All Need Some Joe Maddon 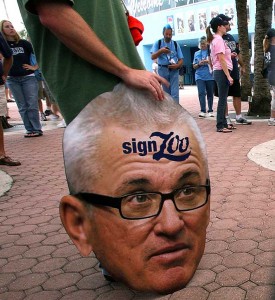 This is it, Sox fans, this is the road to five hundred. A sweep of the hapless Rays and the Sox find themselves sitting pretty at 15-14 with April in the rear view mirror. To get the party started, we turn to John Lackey, fresh off a dominating win against the Yankees.

The Rays can be a real pain in the ass at times, just like their skipper. Sure, Joe Maddon can be a funny guy with the dyed hair and the hipster glasses. He’s like the drunk uncle at every wedding getting a little too freewheeling with his hands with the young ladies on the dance floor. Sometimes he looks like Drew Carey, sometimes he looks like Uncle Junior from the Sopranos.

Don’t let his goofball hijinks fool you, Maddon is a pretty good manager. He’s helped turn a small-market, perennial doormat into an American League East contender. That’s no simple feat when sharing space with the likes of the Yankees and the Red Sox. He’ll get creative, play hunches, and screw with Papi’s head using the shift. But the Sox are catching him at the right time; his starting pitchers are a mess.

Their ace, David Price (who the Sox won’t face in this series) is 3-2 with a 4.75 ERA but he’s already given up seven home runs. Tonight’s starter, Bedard, hasn’t made it into the fifth inning in either of his starts. The Rays’ best chance for a win might be in Wednesday’s match-up of Archer versus Doubront. Archer, who look stoned to the beejeezus in his CBS picture,  has an ERA of 4.11 and a strikeout-to-walk ratio of 5:1. Cesar Ramos starts the final game for the Rays, was recently converted from a reliever and is a bit wild. If the Sox remain patient, he’ll be out early.

Next post The Red Sox in the 2004 ALCS: The Gift That Keeps On Giving