And Somewhere, Bobby V Says, “I Groomed Clay Buchholz for This Success.” 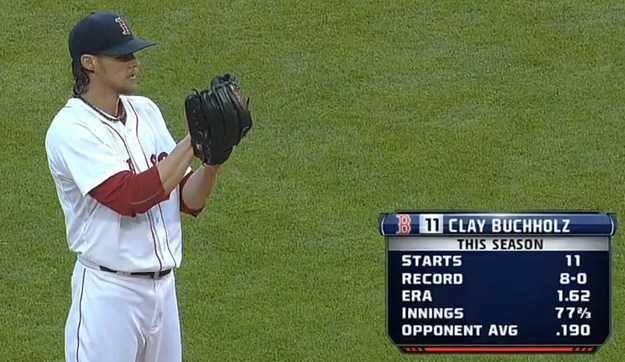 I’m not entirely sure that Clay Buchholz’s hair isn’t an alien symbiote, kinda like Spider-Man’s black costume. But I do know this: every time the guy takes the mound, he’s channeling magic.

In salvaging the last game of yesterday’s doubleheader against the Angels, The Buchster bumped his record to 9-0 and fine-tuned his best-in-the-bigs ERA to 1.71.

He also did this:

So maybe he really is Spider-Man.

He did leave the game in the seventh inning with neck soreness, which could be expected after such acrobatics. We can only hope he doesn’t miss a start because I’ve got some serious green riding on him going 30-0 this season.

Meanwhile, we’ve got a 1.5 lead in the East and Dempster on the hill to try to take the series. If we can’t make this happen, then we deserve a slap. Preferably not in the face.

Next post You Cannot Stop David Ortiz. You Can Only Hope to Contain Him.