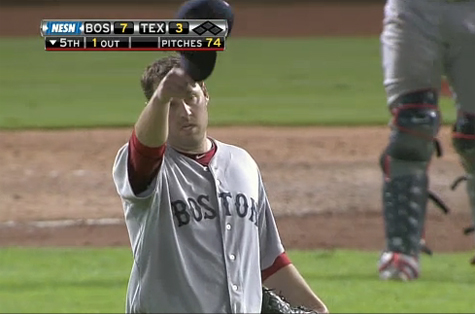 I’ve hardly been a one-man member of the John Lackey Appreciation Society, but I do feel for the guy and what he’s been through in Boston and how he unfairly became the lightning rod for all the anger that Chickenandbeerpalooza wrought.

At the end of the day, he’s a guy who is a pitcher for the team I root for, so I want to see him do well. He’s also a good teammate as far as I can tell, so there’s not much more we can ask for.

Except, of course, winning. And granted, the guy hasn’t done a lot of that since signing a five year, $82.5 million contract with us in 2010, with all of 2012 spent recovering from Tommy John surgery. Which is slightly less awesome than Tawny Kitaen surgery.

I have to figure, though, that riding the pine and hearing the criticisms has been pushing the Lacker to want to surprise us. To want to make us eat our words. To want to make opposing batters feel like they’ve just looked into the eyes of the devil himself every time they step to the plate against him. That’s the Lackey I want to see, shooting lightning from his fingertips and eating rosin bags by the crate-full and taking a page from the Book of Eck and screaming “You’re next” at whoever’s in the on-deck circle.

I put him down for twenty wins this winter and I’m gonna stick to my guns. Why not? With some fire in his blood and some offense behind him, the guy can hopefully make shit happen.

But it all has to start somewhere. And I’m calling for Lackey to release a full-on AMERICAN STORM at the Rogers this afternoon. And that can only mean one thing: