A Cruel Twist of Fate 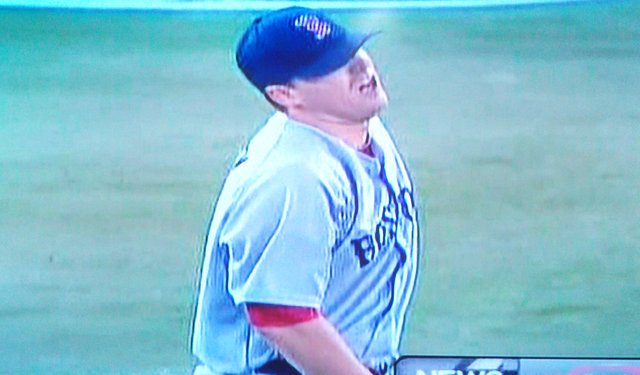 This one’s on me, folks.

You all know how much I wanted Lackey to go out there and shut the Jays down good and take the first step toward his 2013 revival. Hell, I didn’t just want him to win. I wanted him to no hit the Blue Jays, then stomp the Rogers Centre to powder while sitting comfortably at the leather-lined control console of a fifty-foot robot replica of himself, then pull out a guitar and rock a few obscure, post-Monkees Mike Nesmith tunes while NESN captured this glorious meltdown for the ages.

And for the first three innings, it looked like he would get there, collecting six strikeouts while rationing the Jays to three hits.

But then an intrusive phone call reminded me that I had one hour to pick up some merchandise at a local store before they padlocked it into an unmarked storage container in Charlestown. I briefly considered that my leaving could jinx things. But I went anyway.

I was in the car in the bottom of the fifth when Lackey threw a pitch and recoiled in pain off the mound. And it sounded just as painful on the radio. I cursed and banged the steering wheel and pulled over to side of the road, putting on the FULL HESTON at the end of Planet of the Apes.

And, yeah, as Ben pointed out, this one was on my shouders.

@SurvivingGrady so Lackey goes out with an injury right after you stop watching & go to the store? After we told you not to? Imma cut you.

The good news: as greusome as it looked, Lackey’s injury appears to be a biceps strain, not a season-ending injury. Still, you’ve got to wonder about Lackey’s state of mind when he gets back. Is he more timid? Does he roll out like the man possessed he was during today’s short but impressive outing?

Time will tell. But I can’t wait to see him back out there.