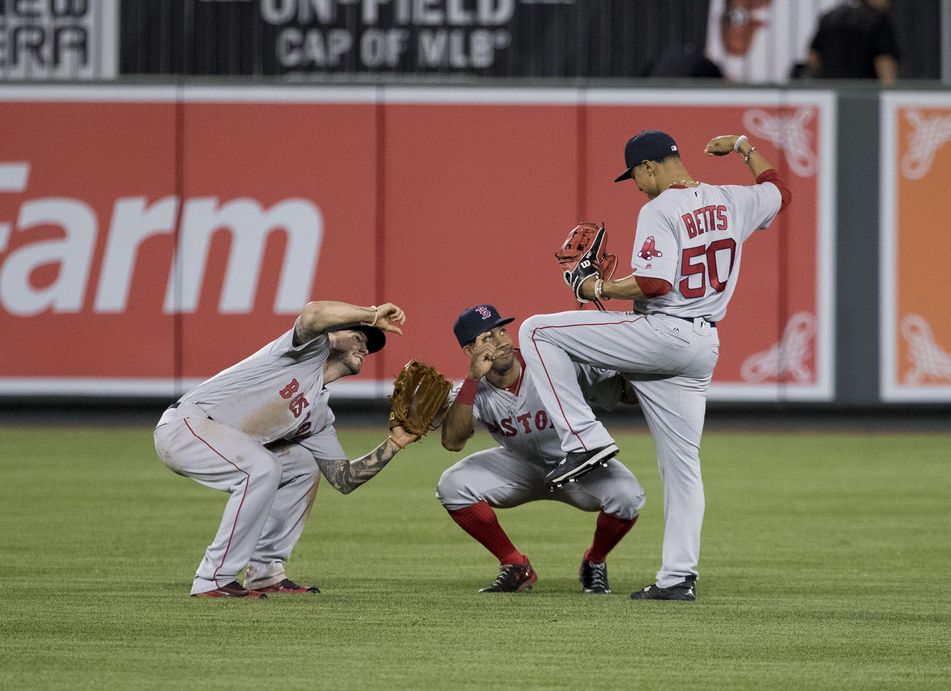 Alright, now that we’ve got the niceties out of the way, let’s talk baseball. Opening Day 2018 is upon us, and you know your team is living a charmed life when one of the biggest questions going into the Red Sox season is “will the outfielders keep doing those crazy dances after every win?”

I figured it was a no brainer. I mean, they’ve built ad campaigns around the damn thing, with T-shirts, slogans, cereal, toothpaste, an upcoming musical and a NESN cameraman whose sole job is to capture the “win, dance, repeat” as the players come off the field. I think.

Alas, nothing lasts forever. Or so says Mookie.

“We’re debating it,” Betts said Tuesday. “We don’t know yet. We don’t know if we’re gonna do it. Then if we do it, we have to just figure out what we’re going to do. So that’s the debate or talk that’s going on.”

So what might the Red Sox outfielders do instead of their beloved dance moves? Me and my morning beer have some suggestions:

Win. Risk. Repeat. Picture it. The game ends. The Sox celebrate. And in the outfield, some underpaid clubhouse lackey sets up a card table and sets down the board game “Risk.” The outfielders then sit down and play a complete game, with updates given throughout the NESN post-game. While admittedly more involved and ambitious, it gives us the chance for such great TV as this:

Tom Caron: And now a quick visit back to the ballpark. Fellas, how’s the game coming along?

Eck: Kamwhat?? Is that a real fucking place?

Win. Goats. Repeat. As you might expect, this one just involves a pack of rabid goats being released on the field, but here’s the thing: they’ll be wearing uniforms with the outfielders’ names. What child hasn’t dreamed of seeing an outfield flooded with goats? We’re making dreams come true here.

Win. Holy Fuck, Mike Timlin’s Driving a Monster Truck. Repeat. Bridging the generations of Red Sox heroes, this one’s got 2004 legend and former Blue Jay Mike Timlin rolling onto the field in a monster truck after a Sox win, possibly impaired and crushing everything in his path. Hopefully not the outfielders.

Win. Go Home. Repeat. The Sox win, the outfielders leave the field expeditiously to join their mates in the locker room. No funny dances, no grab-ass, no hi-jinks. Later, they are seen eating subs at Jersey Mike’s. The world keeps turning.