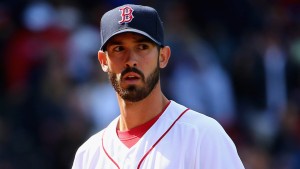 The first thing people think of when they talk Red Sox is the offense. Big Papi, Hanley, the kids: Betts, Bogaerts and Bradley. Eventually – maybe – you talk pitching. And if the Red Sox do anything in the post-season this year, it will be on the back of Rick Porcello.

While the four game sweep of the Yankees was a thing of beauty – the Sox hadn’t accomplished that particular feat since dinosaurs roamed the earth – it was tonight’s game that stands out. Think about how many times the Sox have looked like they were on the brink of greatness this season, only to let their guard down and lose a winnable game?

After the delicious home sweep, a road game in Baltimore could have been one of those disappointments. Not tonight. Finally, the Red Sox lodged their foot securely on the throat of the AL East and refused to let up. The lead is now four over the Orioles with three left in this series. The formula is simple: don’t suck.

Back to Porcello. He needed just 89 pitches to spin a complete game for his 21st win. Not only is he in the Cy Young discussion, he is doing it old-school with three complete games. He only has four losses and his effort tonight lowered his ERA to 3.08.

If there’s any room left on the bandwagon, I’m in.