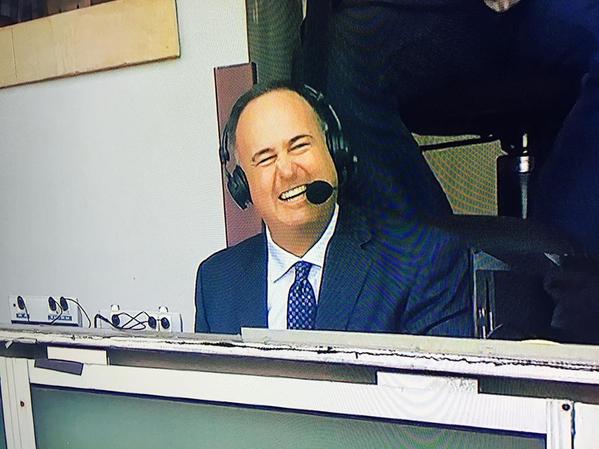 I remember Don Orsillo’s first game as permanent Red Sox commentator for NESN. It was April 4, 2001, and Hideo Nomo threw a no-hitter. I recall cramming one of those chunky VHS tapes into the recorder to capture the final outs, and despite that shitty tape recording (the height of technology 14 years ago), Don’s voice rings with the charming enthusiasm that would come to define his tenure.

Today was his last game with the Sox. I won’t waste any more ink on the epic proportions of NESN’s error in judgment, preferring instead to focus on the positives.

First, there was DO’s address to Red Sox Nation, which is sometimes painful to listen to as he clearly struggles to keep from choking up.

Then there was the end of the game, where the Red Sox players worked their own version of the “O Captain, My Captain” ending of “Dead Poet’s Society,” coming out on the field and tipping their caps to Orsillo. Try watching Don wave back and say, “thank you, boys” without losing your shit.

Today was the end of the Red Sox’ 2015 season. But it was also the end of something bigger. The tenure of a man whose voice and persona had become as comfortable to us as that old, reliable suit jacket you keep in the back of your closet. This wasn’t a home run hitter or star player or hyped-up rookie. This was a goddam TV announcer, and his final words to us brought as many tears as watching the Sox hoist the World Series trophy in 2004. That a guy who was supposed to provide the color — the background noise — to a TV broadcast could come to mean so much to us speaks volumes to the man’s talents. Nothing gold can stay, and Don’s departure is further evidence.

We wish him nothing but success in San Diego. Our loss is their gain.

Next post Painless MLB Playoffs: The Joys of Having No Horse in the Race