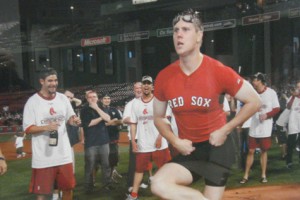 I wonder how many players will look back at their Red Sox years as the best times of their career. Case in point: Jon Papelbon. His tenure in Boston included four All Star appearances, a World Series championship, and a lot of silliness. The Irish jigs after big wins, wearing a Bud Light case on his head…good times.

Papelbon’s time in Philly was productive (and profitable) but he hasn’t pitched in the post-season since leaving the Sox. His recent days in Washington have been tumultuous at best. Paps was ejected for throwing at Manny Machado a few days ago. Teammate Bryce Harper Tweeted this:

Bryce Harper: “Manny freakin hit a homer, walked it off and somebody drilled him. It’s pretty tired…I’ll probably get drilled tomorrow”

Fast forward to Sunday. Harper didn’t run out a fly ball and Papelbon had words for him in the dugout. Harper barked back and the next thing you know Paps is reaching for Harper’s throat and the rest of the team is pulling them apart. Now Papelbon is out for the season.

Papelbon will be in the last year of his contract in 2016 and making $11 million. The Red Sox need a closer. Yes?

Previous post Can Someone Please Get Xander Bogaerts His Gatorade?