Red Sox Giving Us Playoff Baseball in a Year Without Playoffs 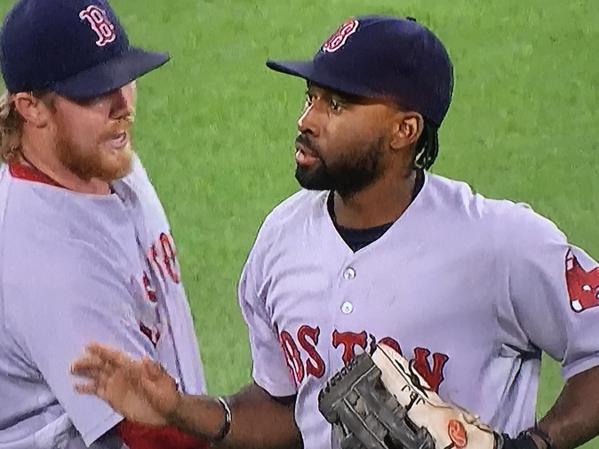 I don’t ask much from my last place baseball team. Give me a couple of heart attack moments where I’m reduced to pacing, cursing, throwing punches at shadows and wrapping rosary beads around each bottle of Coors Light and I’m fine. If I’m not gonna see playoff baseball, at least throw me a couple games where I feel like there’s an October chill in the air, two on and two out, and everything in the world hangs on the next pitch.

That’s what the Red Sox gave me yesterday. Down 4-2 in the ninth, the guys could have very easily rolled over and slept for the 78th time this season. But they kicked it up a notch, scoring five runs on five hits and sending me to delirious heights — and a blood alcohol content — not seen since October of 2013.

At the center of the comeback was Jackie Bradley Jr., lest you think his recent slump was a sign of things to come:

Of course, this being the 2015 Red Sox and the Jays offense being a freaking juggernaut, the game was far from over. As if to remind us that they’re leading the East while we’re renting the basement apartment, Toronto scored twice in the ninth, including a massive Joey Bautista homer, and brought the winning run to the plate. Miraculously, we held on to win. Helping out the Yankees, yeah, but feeling too good to really give a darn.

All in all, it was worth the hangover.

Look, I don’t think this team is gonna crack .500 this season. We’ll very likely finish in last place as well. But games like yesterday’s take away some of the pain, reminding me that 2016 could be a very, very special season.

And in a season in which hope left town around mid-June, that’s all I can really ask for.