For Red Sox, Getting Clayed is Now Officially a Good Thing 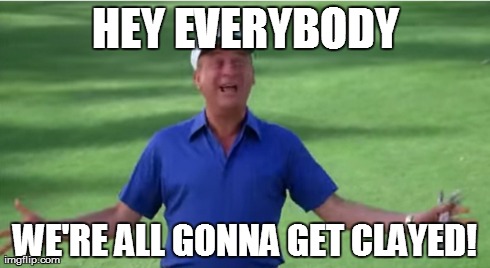 Look, I made this silly-ass meme back when Clay Buchholz was pitching, as Robert California might say, like “some ineffectual, privileged, effete, soft-penis debutante.” It made me laugh and, hey, any excuse to work Caddyshack into the mix.

Now, however, the joke may be on me. Since a rather inauspicious start, The Face That Launched A Thousand Nightmares is suddenly pitching like a goddam lights-out robot.

Tonight, Buchholz was throwing aces again, going eight solid and giving up just five hits and one run to what is arguably one of the league’s more potent offenses. He has won four straight decisions with an 0.82 ERA in the last three starts and his 3.48 season ERA places him eighteenth among American League pitchers. While his cold, serial killer gaze still scares the shit out of me, there’s no one on this team I trust more with a ball on the mound right now than Mr. Clay Buchholz.

As for the offense, The X Man, who is pretty much the most dependable bat in the line-up these days, gave us all the runs we needed with a bases-loaded double in the third. Meanwhile, Alejandro De Aza continued to make a case for sitting/trading/shipping Hanley Ramirez off to some exotic, far away land once he comes off the DL, going 3-for-4. For comparison’s sake, Ortiz, Sandoval and Napoli went a combined 0-for-11.

Of course, Sandoval did take flight, which was pretty cool.

Next post In Baseball and Soccer, John Henry Stands by His Man