We Need One Of These Moments 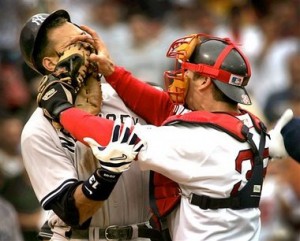 Ten in a row, folks, that’s where we are. The last three series, the Sox have been swept in a variety of ball-busting ways. Even the annual bench-clearing dust-up with the Rays wasn’t enough to spark a comeback. And to rub shit in the wound, Josh Beckett threw a no-hitter today.

Just what the hell is it going to take to fix this team? Here’s a few suggestions…

And just for kicks, throw at one of the Rays Friday night, kick off the series with bang.

Next post John Farrell Has Had Enough of this Losing Streak

Previous post The 2014 Red Sox: Good Enough for Me and Bobby McVee