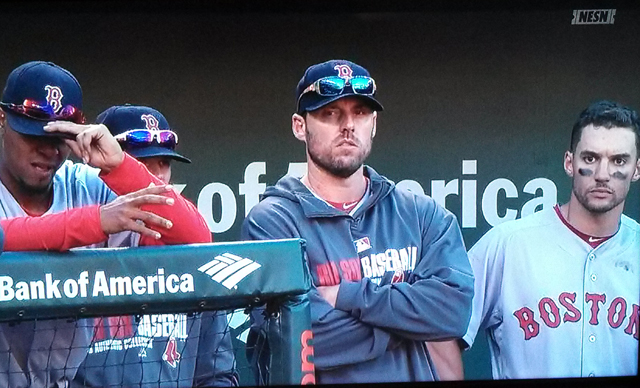 Okay, I’m lying on the S.H.I.E.L.D. thing. But would it surprise you if John Lackey, who has defied every tenet of the reality you and I hold dear to become the Red Sox’ most valuable starter, was on Nick Fury’s speed dial list?

Just a week after besting the Yankees with 11 Ks over 8 innings, the Lackster gave hell to the Rays last night, going another eight and allowing just two runs. Now he’s the Red Sox’ winningest pitcher thus far on the season and the guy we want to see get the ball in any tough situation. Take that, 2011.

In fact, right now, John Lackey and Jake Peavy are our two most reliable starters this season. So welcome to the other side of the looking glass.

Honestly, though, tonight’s win was a true team effort. In fact, everyone in the line-up, save Xander, had at least one hit. On the “We Love Encouragement” front, Shane Victorino went 4-for-4, JBJ had two big doubles, and AJ Pierzynski continued to hit, going 2-for-4. With the bats heating up and the team winning 4 of their last 6, I gotta believe the elevator is locked in the “up” position. The true test will come tomorrow, when they try to hit that elusive .500 mark for only the third time this season.

The only downside came courtesy of Edward Mujica, who came into the top of the ninth and promptly surrendered two runs on two hits, inflating his ERA to 10.00. Not caring to see the wind-burnt crowd get violent and storm the field, Farrell brought in Koji who struck out Ben Zobrist on 3 pitches to end the game, reminding us all who’s boss.

Meanwhile, Joe Maddon had this to say.

Next post Jackie Bradley Jr., I Can Tell That We Are Going to Be Friends

Previous post Red Sox vs. Rays in the Battle for the Planet of Last Place