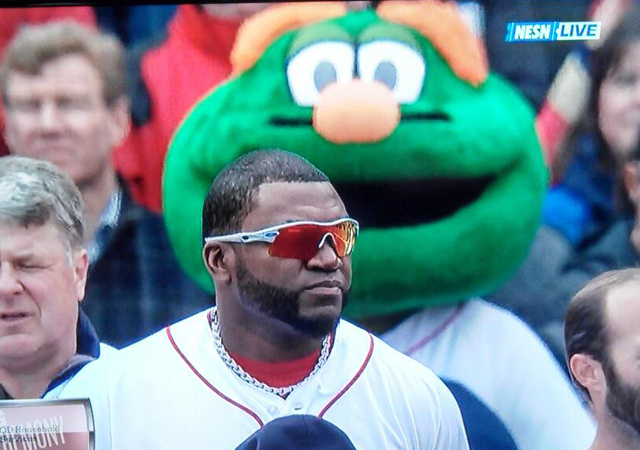 If you needed a reminder of the embarrassment of riches that the past decade has been for Red Sox Nation, yesterday’s Fenway Opening Day gave us that and more.

First, we had a chance to once again thank our 2013 heroes, who were all dolled up in sparkling, gold-trimmed jerseys. That meant another justifiably huge ovation for John “He Who Can Now Do No Wrong” Lackey; mad props to the new kid, Xander Bogaerts, for his contributions last October; and re-affirmation that David Ortiz is The Prince of New England. Seeing Papi wearing a chain with all three of his World Series rings dangling off it was a reminder that none of this might have been possible had he remained a Minnesota Twin. And I can only hope this sparks a trend of actors and musicians wearing past Oscars and Grammys around their necks.

On top of that, we had Mike “Scenic” Lowell back in town, along with Pedro and V-Tek, getting us all nostalgic for the likes of Curt Leskanic and Coco Crisp.

But as I watched the ceremony over and over last night, one thing kept striking me as odd. During one segment of the ring presentations, The Who’s “Baba O’Riley” was playing. And perhaps this was all in my booze-besotted mind, but the neat way the lyrics paired up with the on-screen action seemed a little more than coincidental.

For example: John Lackey emerges from the dugout just as Roger Daltrey bellows: “I don’t need to fight / to prove I’m right / I don’t need to be forgiven.” Which, of course, makes perfect sense.

Later, an emotional David Ross steps out to get his ring. Clearly fighting back tears as the crowd goes nuts for him, he composes himself with a hearty yelp, then proceeds down the red carpet. But just as he gets his ring, we hear Pete Townshend sing, “Don’t cry / don’t raise your eye.” Hmmm.

The best and perhaps most blatant example comes when Mike Napoli struts out of the dugout just as the chorus of “teenage wasteland” kicks in. In fact, the song is faded out after Daltrey sings, “They’re all wasted!” and the screen shows Naps lumbering down the line–some sort of ode to his now-infamous parade day romp through Boston’s bars?

I’m sure I’m reading way too much into this. But I invite you to have a look and see what I mean. (And I encourage you, where possible, to rely on your DVR version rather than my sad upload here.)