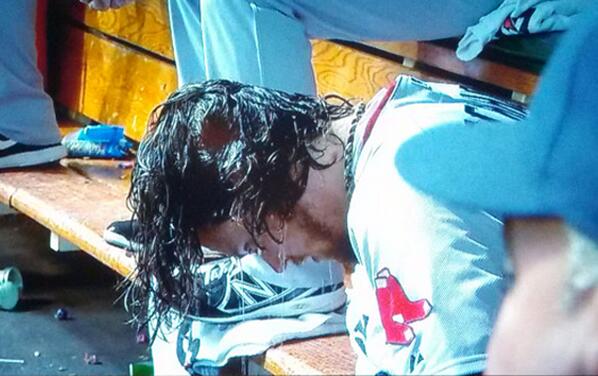 Roughly one month into the 2014 season, and the only thing the Red Sox have done consistently is be inconsistent. They are presently at 9-11, and to date, have only been able to string a max of two wins together. Over their last 10 games, they are 5-5, which perfectly describes my attitude toward them; one day, I think they’ve uncorked a little of that 2013 magic, the next I consider them direct descendants of 2012’s ill-fated crew.

On this date in 2012, the Sox stood at 4-10. Last year, they were 13-6. Today, they’re somewhere in between those numbers, at 9-11. They’ve only been at .500 for two days this season, and every time they get close to that milestone, they seem to take another step backward.

Truth is–and this is coming from someone who hasn’t predicted anything correctly in 10 years–the 2014 Sox will probably end up falling somewhere between those two extremes. Not that a repeat World Series isn’t possible, but something about that 2013 team just clicked, even when it made no bloody sense on paper. This year, we’re still trying to get our arms around some things. We miss Ellsbury at the top of that line-up. We’re experiencing Xander’s first-ever full season in the bigs. All our pitchers are another year older. And guys like Victorino, Middlebrooks and Napoli might be tough to count on health-wise for an entire season.

On the other hand, this could just be the last remnants of the 2013 hangover shaking off. While most other teams slept, the Sox carried on through last October and, with press duties, DVD recordings, interviews and post-celebration celebrations, most of the winter. Can we blame them if they’re a little tired from carrying this city on their shoulders last year? If June hits and the lads go on a 25-4 tear, would anyone truly be surprised?

The good news is that the 2014 Red Sox aren’t the only model of inconsistency around here. If they win tonight against the Yankees, tune in tomorrow for my post about my plans for the 2014 duckboat parade.

Previous post Is This the Turning Point for the 2014 Red Sox?