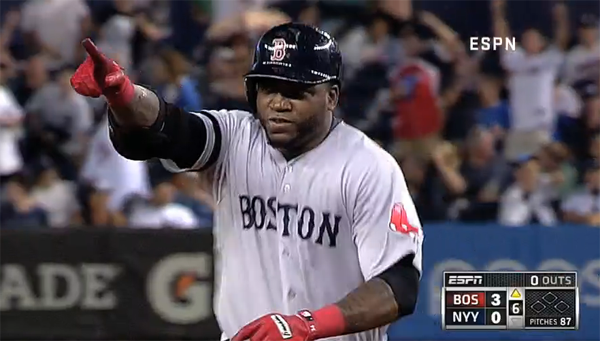 Every winter, you can count on three things around these parts: snow, lame excuses from me in advance of lousy Christmas presents, and some sort of story about David Ortiz wanting to stay in Boston and extend his contract.

So here we are, on the heels of the 2013 miracle, and it’s happening again.

My question is this: if we know the guy is the face of the franchise, the Baddest Ass in Boston and the de facto spokesperson for all things awesome, why the hell don’t we just lock him up for the rest of his days. I know that’s not “good business” or “the way the Red Sox front office does things.” But can’t we all agree that Ortiz is a special case? Do we really need to play this game, season after season, where ownership has to “fully assess the situation” and “become more aware of our strategic trajectory”? I’ve heard enough “David’s an important part of our team and we want him to remain a Red Sox for a long time” orations to fill six 90-minute Maxell audio cassette tapes. I say throw all the procedural bullshit out the window and just tell the Large Father that there’ll be a suitcase full of money waiting for him at his locker for every season he wants to keep coming back. Simple as that.

Over the past ten years, whenever we’ve needed someone to come up huge, he’s been the guy. Down three games to none in the 2004 ALCS against the Yankees? Fine, here’s some walk-off magic. Worried that some punks are gonna dictate our freedom? Give me that mic, let me drop an F-bomb, rally the troops and become OFFENSE PERSONIFIED in the postseason.

Without Ortiz, two of the three World Series titles we have probably don’t happen. Actually, f$%k “probably”–they just don’t. It’s time to acknowledge that the guy is the single most important Red Sox player who ever lived and just sign him up for life.

And if you have any sense of hesitation, just watch this:

Got that? Good. I’ll get your pen.

Next post For The Man (Or Woman) Who Has Everything