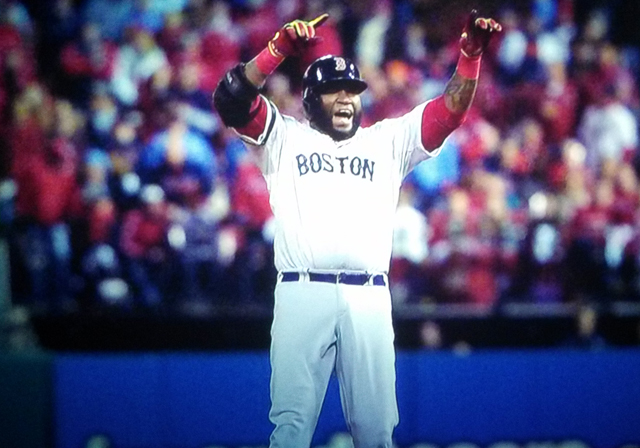 Ever since game one, we’ve been wondering when the Red Sox bats were gonna spring back to life. And last night, while Clay Buchholz–who looked like he’d rather have been on death row–and Felix Doubront kept the Cardinal bats in check with four hits and two runs through 6.2 innings, our own offense looked equally deficient.

While the topics of said meeting were kept under wraps by the Sox players, we can assume it was something profound. Because Jonny Gomes came out like a man possessed just a few minutes later and cracked a three-run homer into the bullpens.

The reaction to Gomes’ home run — by both Gomes and his teammates — is something that can and should be watched on loop forever.

After that, the game took a number of weird-ass turns, including another Breslow meltdown (which, I have to figure, signaled the last time we’ll see Craig in this World Series), a relief appearance by John Lackey, and a Koji pick-off to end the game and leave the Cardinals with the same befuddlement that we felt at game three’s end.

Where do we go from here? Tonight we’ve got Lester on the hill, and if he can get us a 2-for-3 showing at Busch, you’d have a hard time convincing me the Red Sox weren’t going to go on the win this thing.

In the meantime, we’ll just sit back and bask in the glory of last night, which ended with David Ross showing his appreciation to Gomes during an interview with Jenny Dell: