One Game In, I’m a Peavliever 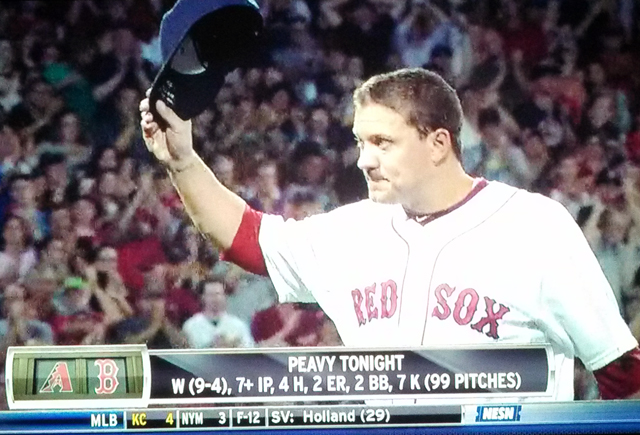 We’re just one start down, but the Jake Peavy pick-up already looks like the shot in the arm we hoped it would be to our pitching staff. In his first Red Sox start, Peavs went seven innings giving up just four hits, two runs and striking out seven, powering the Sox to win.

Even better, he finally shut down Cody Ross, who hasn’t stop blabbering about his return to Boston since his flight landed at Logan. Ross went 0-4 last night after going 4-4 on Friday.

If he can pull off about seven or eight more of these starts from now ’til October 1, I’m alright with it.

In what should surprise no one, Jonny Gomes also played a huge part in the win, launching a throw to the plate with the precision of a f%^king microsurgeon to nail what — at the time — would have been the tying run and preserve Peavy’s W.

The play inspired the quote of the night from Peavy: “Jonny Gomes might be my favorite player in the big leagues.”

Folks, I have to admit: I keep waiting for the other shoe to drop. But here we are, almost one week into August, and the Sox still have the AL’s best record — and second best record in baseball — as well as a one-game hold on first place in the East. And we’re playing the Astros next week.

It’s a gorgeous 78 degrees in Boston right now, I’ve got a cooler full of beer and the Sox are tearing it up. Happiness is king.

Previous post Not to Put Too Much Pressure on Jake Peavy...