The Thrill Is Back. And So Are the Rays. 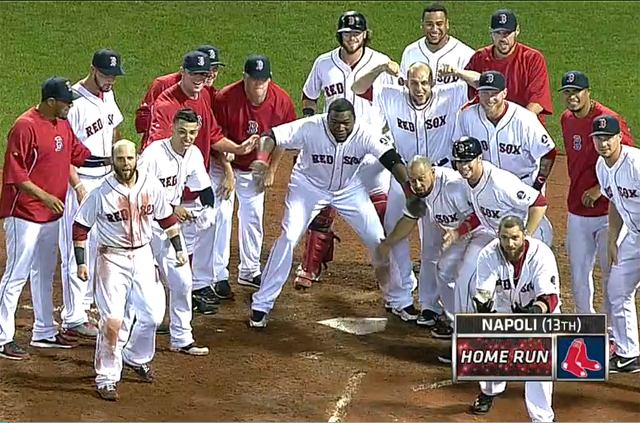 It’s ironic that this morning’s walk-off win against the Yankees happened two days shy of the ninth anniversary of Bill Mueller’s famous walk-off against Mariano Rivera in 2004. Because the feelings I have about this team today are very much like the ones I had for the Idiots of ’04 at that point. Like they’re suddenly operating on a different level. Like something big is coming. And yes, I have been drinking. But that’s beside the point.

Look, last night, I ran through more emotions over the course of a five-hour game than I think I did through the entire 2012 season (unless you count praying for a giant eagle to swoop down on the field and take away Adrian Gonzalez as an emotion). I was pacing the floor, punching the wall, downing cheap beer, eating what turned out to be two entire boxes of Hostess Twinkies and three pork chops, and hollering at the TV at a level that could be defined by most of my neighbors (at least the ones quoted in the police report) as “disturbing.”

In short, I had a f#$king blast. And that’s the one thing I missed last year.

That feeling you had today? The one where you only got four hours of sleep but still felt like a million bucks on the job? That’s not love, Percy. That’s the f#$king Red Sox. The 2013 Red Sox. You can have your reality TV and World Cup Action and crowdsourced movies. All I need is the buzz off a win like last night’s to keep me rolling.

I don’t even fear the Rays. Yeah, I’m not exactly thrilled to be putting our chips in on Brandon Workman, especially against Matt Moore. And the fact that every newspaper in the world has spent the day warning me that as a Red Sox fan I need to be “worried” about the “buzz saw” that is the “Rays,” who have won 13 of their last 14, is a bit unsettling.

But look a bit closer at who their last 14 games have been against: the Astros, Blue Jays, White Sox and Twins–all teams under .500. Some, in fact, well under .500. Tonight, the Rays are facing the team with the best record in the American League–a team that’s beaten them 9 times out of 12 meetings this year. I think it’s Tampa Bay who should be nervous.

Crack the beers, get the steaks on, place your bets, get yer World Cup 2014 odds. The battle of the AL East giants is about to begin.