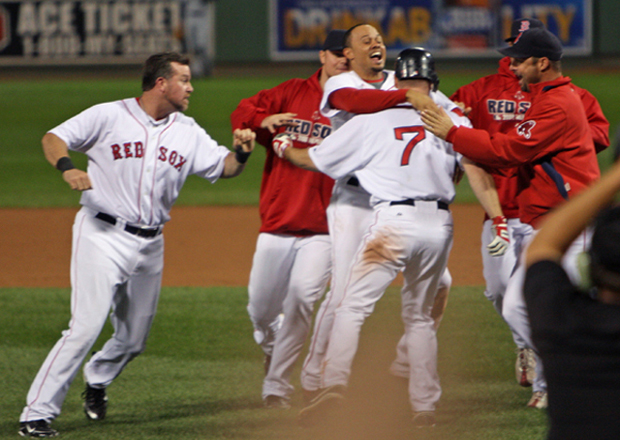 Among the great Red Sox Victories In Playoff Series We Eventually Lost, game six of the 1975 World Series perhaps stands tallest. And that makes sense.

But right below that–and certainly before any indignities suffered in 1986 and 2003–I’d put game five of the 2008 ALCS. In the list of Rays-Sox battles, I’d even put it above Pedro getting attacked by Gerald Williams then almost no-hitting Tampa Bay.

Again, it’s tough to cast a positive eye on it, knowing how the series ended. Especially since, at the time, the Rays were one of our most hated rivals, far removed from the chew toys they’ve become for us this season.

I was watching it at The Fours down on Causeway, packed in with all the other drunks and diehards who knew that, in the wake of the 2004 ALCS, nothing was impossible. But in the seventh inning, we were down 7-0 in the game and 3-1 in the series. So the beers were draining faster and with extreme prejudice.

Then the Elf knocked in a run. Then Papi cracked a three-run bomb. And we headed to the eighth down by 3. And one inning later, we had those runs too, courtesy of a JD Drew two-runner and a Coco RBI. By now, the crowd was frenzied. And I’ll be damned if I didn’t try to get a spirited call of “WHEN I SAY KOTSAY, YOU SAY F$#K YEAH” going.

Let’s just say I spent the rest of the night roaming the streets of Boston–literally–unable to sleep, unable to contain my feelings, unable to wait for the first pitch of game six.

While I still can’t watch the Aaron Boone game, even knowing what happened the following year, I’ll roll tape on game 5 of the 2008 ALCS every now and then. Because it really was a f%^king magic show.

And while we’re on the subject, check TJ Connelly’s blog entry about that game. He was spinning the music at Fenway and offers a unique perspective on the hugeness of that comeback.