That Was Then, This Is Now 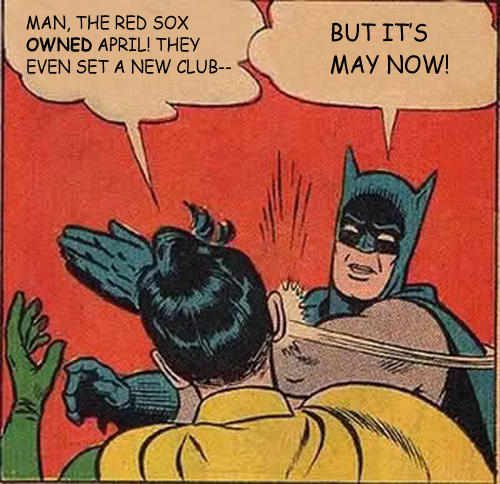 The other day, while watching the Sox cough one up to the Twinkies, I started wondering aloud if this team was heading for a June swoon in May. But then I realized that April was an absolute f#$king embarrassment of riches. If anything, the Sox over-performed throughout the first month of the season, and it couldn’t have come at a better time.

For one thing, it helped wash away the lingering taste of the 2012 season. For another, it gave this city a bit of uplifting when we needed it most.

And now May is here, taking over our living room like a drunk loutish uncle, waving around his 3-4 record and filling the place with cheap cigar smoke and making us all uncomfortable with that story about how he once tried to mate with a pigeon*. I’m not happy about it. But after what I saw in April, I’d be a true dink to complain about it. If I could cut Wes Chamberlain and Danny Darwin some slack back in the day, I can certainly give the 2013 edition some time to get their shit together and re-discover their winning ways.

If they wanna start tonight, hey–even better. With Allen Webster making his second start of the season, it should at least be interesting.

*Not based on any real-life uncle.