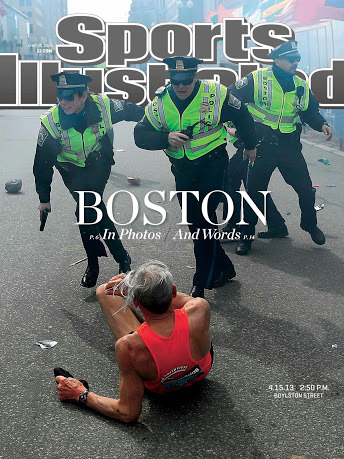 For those of you who aren’t connected on Facebook, I did run the Boston Marathon yesterday. Well, all but the last half mile. Twenty-four hours later I’ve had enough time to let the experience settle and hear some of the stories. I wanted…needed…to get my thoughts on this out there.

Yesterday looked like it was going to be a near-perfect day. Despite my lack of training and disaster in the Sedona Marathon in February, I was on pace for my second-fastest time ever. I felt great, the weather was perfect, and I was having a great time just soaking it all in, texting while running and taking pictures (which I’ll share later when it feels appropriate).

My Garmin had me at 25.7 and on pace to finish in 4:20 when the wall of people in front of me stopped running. At first I was annoyed, thinking there was some idiots that ran on the course and caused a massive slowdown, or some other stupid reason for the delay. Then I heard spectators talking about an explosion at the finish line, and I figured gas line explosion or transformer. How naive.

I began trying to contact friends and family and quickly confirmed everyone was safe. My oldest daughter was running but I knew she was behind me and safe. My youngest daughter didn’t end up going to watch the race and my wife was at home. One of my friends who ran had already left the finish line area, obviously a much better athlete than I am.

As word got out that it looked like the explosions were not accidental, people began to panic. Keep in mind we are packed in tight on Boylston Street with more people filling in behind us and spectators five deep on both sides. I let several people use my phone but no calls were going through. It is still unclear whether service was shutdown or the circuits were simply overloaded. But I will never forget the pain and helplessness of those unable to get in touch with loved ones.

I walked with my daughter back to Simmons College through a sea of shocked faces. People were still running, not knowing what happened, and spectators were still cheering. It was surreal. When I got in the car and turned on the radio, it started to sink in what was really happening. I was more angry and sick with every report I heard. How could this happen?

When I got home and started watching coverage…it was 9/11 all over again. I know people don’t want to hear the comparison and that this wasn’t nearly on the same scale, but try telling the Richard family that. Both acts were out of hatred and executed with pure cowardice and they both infuriate me. The people responsible for this will be found, and no punishment is too severe.

There is nothing that can make this better or lessen the pain except for time. But there were some stories that manage to lighten the heart in the aftermath of a tragedy. First, the people on the scene – police, fire, EMT, soldiers and civilians – were amazing. To see an explosion like that in a crowd of people and actually run towards it to help…I have no words for the courage and goodness in those people’s hearts. Thank you. There is no question that without the unselfish actions and quick-thinking of those first on the scene that more lives would have been lost.

This afternoon I heard that the local Red Cross and MGH blood banks are turning people away, asking people to schedule a donation a week or two out. The reason? The overwhelming response they received yesterday across the city with people donating blood after hearing of the bombings. These are the stories that help me cling to the belief that there are still a lot of truly good people out there and that the few cowards responsible are just an aberration.

As further proof, Boston College students are organizing a Facebook event called Boston Marathon: The Last Five. It is just another way that America rises in the face of adversity and refuses to waver. We have proven that we are, as the Pledge of Allegiance states, one Nation under God, indivisible, with liberty and justice for all. Today, we are not Bostonians or New Yorkers or anything else, just Americans. And justice will be served.