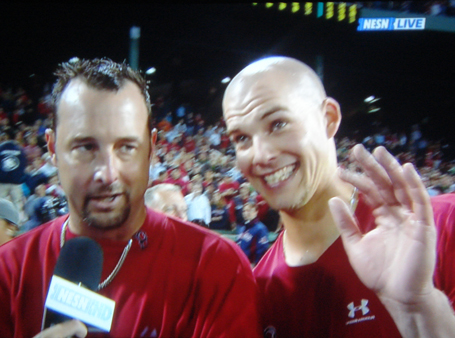 Back in the day, when the Red Sox were interested in trading for some new talent, they followed a simple strategy: they sent the prospective player out to lunch with Teddy Ballgame. If Teddy got good vibes during lunch and came back with a thumbs up, a deal was made. On the other hand, if the player did anything to upset the Tedster–for example, not showing up with a hooker and case of malt whiskey as a sign of respect–then not only was the player not pursued, very often he was beaten within an inch of his life and left in a burlap sack somewhere in Winthrop.

Of course, that was a different era. Before Bud Selig stamped out “street justice.” But I think the old school approach had its merits. Therefore, rather than rely on such bullshit as facts and numbers, I’m going to offer my perspective on a player’s “contract worthiness” based solely on the criteria that the Red Sox used back in the day: would I want to have lunch with this guy?

Anibal Sanchez: Assuming Sanchez has a fondness for dishes from his native Venezuela, which include healthy portions of goat, fish, rice, corn and tubers, I may be f#$ked. If he’s willing to go to Arby’s for a couple Beef ‘n’ Cheddars while we watch a DVD of his blanking the Yankees in the 2012 ALCS, it’s on. Otherwise, plenty of other right-handers to choose from. Verdict: No.

Shin-Soo Choo: After six beers (and when you go to lunch with me, you’re throwing the beers down until someone dies or pisses themselves unconscious), I’d be murdering this guy’s name. I mean, I’d be all “Look here, See-Show” and “Another buffalo wing, Slee-Stak?” If he’s not sensitive to my ugly American antics, then we can do this. If he’s a sensitive sort of chap, forget it. Verdict: Probably not.

Justin Masterson: Are you shitting me? LOOK AT THE SCREENCAP AT THE TOP OF THIS POST in which J-Mast photobombs a Wakefield post-game interview. That’s all the evidence you need to know that this is a guy you want to spend quality time with. So that’s a yes.

Mike Napoli: I see a carb-heavy Italian meal, shit-tons of beer, at least two waitresses propositioned, a fellow diner bumped “accidentally,” fisticuffs, broken tables, someone heading face-first through a plate-glass window, gunfire, horseplay, the robot from that Hugh Jackman movie laying waste to the building and surrounding real estate, the National Guard and that burning sensation that can only come from being tear-gassed at close range. Verdict: F#$k, yes!

Josh Hamilton: Anyone whose Wikipedia page includes a section titled “Nightclub Incidents” is the kind of person I’m eager to break bread with. Verdict: yes.

Adam LaRoche: I liked LaRoche when we had him back in the day. And as the guy is a noted hunter, any lunch with him is bound to be packed with ridiculously awesome stories about staring down bears and deer and possibly rabid squirrels (not to mention hillbillies). Even better: his uncanny resemblance to Scott Ian of Anthrax increases the chances of the waitress and three of her sorority sisters inviting us back to their place for a spirited round of “Feel These.” Verdict: Bring the noise. Either way, hit TonsofTickets.com for your seat to the action.