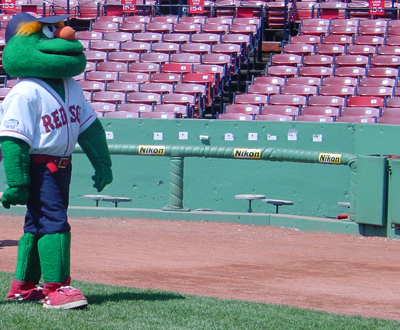 Property of the Mexican drug cartels

We’re coming up on yet another season of Red Sox baseball and, as usual, we want to help you defend against the slipshod ratings that could come with a team stumbling out of the box. Not that we want to see that, mind you, but it’s always good to have a back-up plan that doesn’t involve P90x infomercials or Silly Fisherman re-runs. Please feel free to steal any of the following ideas. Just send the box of cash to our Boylston Street address.

Jason Varitek: Retired But Still Here! In this reality series, everyone’s favorite former Red Sox catcher shows up at spring training to offer some guidance to the young’uns. Then accompanies the team back to Fenway for the start of the season. Then decides to follow the guys on the road, sharing such fascinating insight as his favorite rib joints in Kansas City, how to beat rain-delay boredom with a game called “Potatoes in the Oven” (NSFW!) and which NYC hookers don’t mind dressing up as John Quincy Adams for an extra sawbuck. Around the All Star break, when one of the new kids asks what the f$%k Tek’s still doing here, the Cap’n responds with a powerful roundhouse kick to the groin. A couple of nature-themed episodes will show Tek’s “softer side,” including a sure-fire sweeps week winner in which Jason takes a select group of guys on a berry-gathering mission to the Blue Hills and discovers an injured (and–to be revealed in a later episode–talking) elk which he nurses back to health.

Caught Looking: It’s okay to admit that letting Heidi Watney slip away might have been NESN’s biggest misstep since “Dwight Evans, OB-GYN.” Here’s your chance to make it right. In this “hidden camera” show, a visibly inebriated Heidi is sent out to hit on married guys at popular pre- and post-game watering holes like Copperfields, The Cask and Denton’s shady Back Bay apartment. For every dude she succeeds in coaxing back to the “NESN Love Van” (where a number of thugs await, ready to beat the guy within an inch of his life), $500 is donated to a local charity. And we get enough blackmail material to fill the cash void left by any lost advertisers.

X-31B, Robot Shortstop: Part sitcom, part reality, this show kicks off on opening day 2012, when Red Sox management explains to Mike Aviles that they’re replacing him with a an android shortstop built by some whiz-kids at MIT. Cameras will then follow the team as they try to adapt to having a robot teammate (something that years of working alongside JD Drew likely prepared them for) and Aviles as he applies for a job with the front office and, eventually, the local Papa Ginos. Hijinks ensue when Aviles’ wife approaches MIT about getting a robot of her own.

Don and Jerry: Life In the Booth: A psuedo-documentary show in which Don O and the Remdawg are locked inside their NESN brodcast booth during the apocalypse (which hasn’t actually happened, unbeknownst to them). Hidden cameras capture their every move, including the realization that they may be alone in the world, desperation as they fight over the last Fenway Frank, the unavoidable and spectacularly disturbing descent into man-on-man passion and their inspiring yet ultimately doomed attempts to radio for help using a transmitter constructed from baseballs, microphone wires and cigarettes. I’m already envisioning a season-ending cliffhanger in which the booth door is opened to reveal a scroungy, bearded Jerry gnawing on DO’s pancreas.

Hazel Mae/Tina Cervasio Dance-a-Thon: I haven’t really worked this one much beyond the title stage. But, seriously, do you need anything else?

Wally’s Run: Each week, a derelict or homeless person (we can grab someone from Pinestreet or off a bench in front of the Hurley building on Staniford) will be drugged, fused into the Wally The Green Monster costume, and dropped by plane into some Latin American country, where they’ll be forced to fend for themselves to get their asses back to the states. Those who make it back are rewarded with a respectable job at a Southie meatpacking plant. Those who don’t become official property of local drug cartels.

You Just Got Kicked in the Nuts by Johnny Pesky: Going on the Betty White principle that old people doing practically anything is downright hilarious, this low-budget show will simply feature everyone’s grandpa approaching unsuspecting fans around Yawkey Way, shaking their hands, giving them a hug, and kicking them square in the pills. Pesky then drops the show’s title–which will double as his post-ballkick catchphrase–to the obvious delight of the victims. Not quite sure what we can have Pesky do to female fans, but it will probably involve taking them to a nice dinner in the North End and then asking them to co-sign an auto loan.