A Yankee Once Again 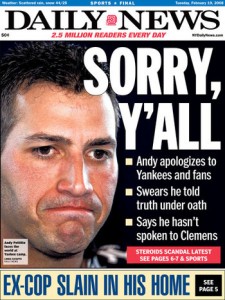 After “retiring” for a season, Andy Pettitte is back in pinstripes. Now what would a thirty-nine year old man do for a whole year away from the game? Depending on what kind of numbers he puts up, I would speculate a cycle of PEDs. The Yankees who once had concerns in the starting pitching area, now have the following names to pick five from:

That’s some depth. Considering the Sox counter with the likes of Bard Aceves and Doubrant, it’s going to be tough to win the East.