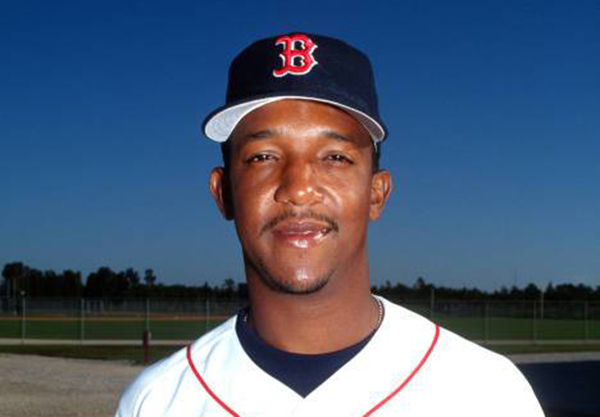 Twenty-four years ago today, Pedro Martinez made his first start for the Boston Red Sox. In seven innings against the Oakland A’s he struck out 11 and gave up just three measly hits and no runs. The Sox won, 2-0. And everything in our world, whether we knew it or not at the time, was about to change.

Through the years, I’ve made a lot of jokes on this site and on the Tweeterz about putting my fist through a wall during Red Sox games. Fact is, dear readers, I’ve only really done it once. On the evening of August 29, 2000. When Pedro Martinez lost a no-hitter in the ninth inning of a game against the Devil Rays.

Back then, on that fateful night, some of you may have been in diapers. Maybe one or two not even born. Some of you were working or sleeping or prepping for college or enjoying the last vestiges of summer vacation rolling on a towel with your lover on the beach.

But I was a grown-ass man putting his grown-ass fist through a wall I’d paid for. Over Pedro Martinez.

That’s the passion that the man inspired in me.

I lived through Clemens, mind you. And while I may have been too young to fully appreciate him, I can’t deny the power of his games. I still recall fumbling with my school work while listening to the Rocket mow down twenty Mariners in one game back in 1986. But most of my memories of Clemens are tainted by some epic, early ’90s playoff meltdowns (“I know where you live, Terry Cooney!”) and, of course, that going to the Yankees bullshit.

Pedro Martinez, on the other hand? It seemed like all of his starts, from the moment he joined us to the minute he left, were holy days of obligation. At my parents’ house, we arranged the chairs to resemble bleacher seats, waved Dominican flags, printed K cards and worked the eye black. We were young and trophy starved and couldn’t get enough of him. His mastery was so immense, so otherworldly, you were transfixed by it.

Beyond the talent, the guy had two other things that made him a legend in this town: balls and a playful, almost childlike personality. The swagger. The head pointing. The drama queen antics. The Yoda mask. The dance moves. The dugout cheerleading. The Jheri curls. “Wake up the Bambino and maybe I’ll drill him in the ass.” He had a heart as big as your Aunt Selma and a body that seemed vulnerable to the slightest breeze. Hell, the guy was so persuasive, he somehow sold Red Sox ownership the ultimate monorail — putting his brother Ramon in the starting rotation.

But when he got on that mound, man, all he was missing was the cape. And some nights, he even had that.

His rules were simple: “The inside of the plate is mine. Thou shalt plunk my teammates at your own risk. The ball you hit over the wall this inning could be the ball that gets wedged up your south 40 next inning. So think about it, punk.”

My two favorite Pedro moments provide splendid bookends to his remarkable tenure in Boston. The first is in 1999, when he reversed the tide of the ALDS, coming in against a Cleveland team that was beating the tar out of the ball and rendering them completely inoperative. In those days, the salad days, he was the angel of death. And on that October night, with a packed house in Cleveland going apeshit and tasting Red Sox blood, the bullpen door swung open, a slight figure ambled out of it, and an eerie silence descended. Because Pedro was coming into the game. And that was like flipping a switch. Over and out. More on this game later.

The other came during game five of the 2004 ALCS, when Petey came up and in on Hideki Matsui, knocking him on his ass and effectively taking his bat — which to that point had become Thor’s Hammer — out of the series.

Today, he has some sort of job with the Red Sox — the Ambassador of All That Is Good and Right in This World or something like that. I don’t care what they call him, I just like having him around. I like seeing him flitting around Red Sox spring training, playing grab-ass before games at Fenway and serving as Obi-Wan Kenobi to a new generation of Sox pitchers.

Sure, his immortality is already guaranteed in Cooperstown’s hallowed halls. But in my mind — and in the mind of anyone who grew up watching Pedro Martinez work his magic — it was already assured.

And it all started twenty-two years ago today.

Next post Stop Screwing Around and Bring Back Brock Holt 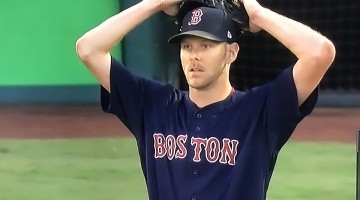