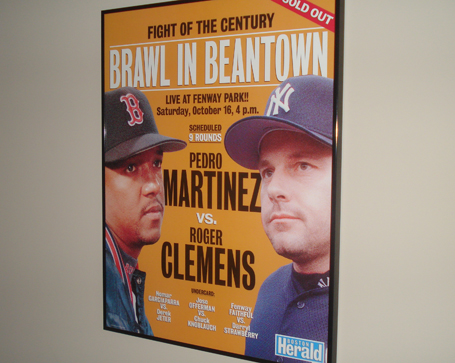 Before the 2004 ALCS, our greatest postseason triumph against the Yankees was game three of the 1999 ALCS. Of course, for a Sox fan in the late ’90s, there weren’t a lot of joyful postseason memories to cling to, at least any that took place in an era in which men weren’t required by law to wear stovepipe hats. We were still living off the fumes of our comeback in the 1986 ALCS, wondering if we’d ever again get so much as a sniff of some World Series action in our lifetimes, especially after a couple of ugly October meltdowns against the likes of the A’s and Indians in 1988, 1990 and 1995.

Then 1999 changed everything. We were dead -– dead I say –- against Clevelend in the ALDS, but then we pulled victory from our collective asses thanks to Ireland’s favorite son, Troy O’Leary, and Pedro Martinez. Then we had a date with the Yankees in the ALCS, with the winner going to the Series.

Turns out that for Sox fans, the 1999 ALCS would be a rather lopsided and maddeningly forgettable affair. By the time the series got to Fenway we were already down 0-2 and you wouldn’t have put Vegas or 22bet odds on the Red Sox punching a ticket to the World Series. Simply put, the Yankees kicked our asses good, exploiting the fact that our rotation wasn’t all that imposing anytime a guy who wasn’t named “Pedro Martinez” was starting.

However, the one game Pedro did start in the 1999 ALCS, game three, was a fucking masterpiece.

As you may have read, 1999 was the Year of Pedro. He went 23-4, held a 2.07 ERA, led baseball with 313 strikeouts, dazzled the world in the All-Star game at Fenway, easily scored the AL Cy Young and should have been the MVP. When he took the mound in game three of the 1999 ALCS, to face-off against prodigal son Roger Clemens, the buzz, to put it mildly, was off the charts.

In the first inning, when the Rocket took the hill, the crowd was out for blood, launching the now-infamous “Ro-ger” chant (which would become “Where is Roger/In the shower” a few innings later). And very quickly, Clemens found himself on the business end of a 2 run deficit, thanks to an Offerman triple and an over-the-Monster blast from Johnny V himself, as the crowd worked itself into a frenzy not unlike the crowd in the scene where Snake Plissken fights Ox Baker in Escape from New York. By the second inning, Roger was gone, and Hideki Irabu was brought out as the sacrificial lamb. The Sox went on to score 13 runs, easily trouncing the Yankees and giving the fans one final thing to be happy for that season.

Pedro, meanwhile, was Pedro, striking out 12 and giving up just two hits and no runs through 7. Yes, the series was shit. But for one glorious game, we had Pedro Martinez at the height of his powers slicing and dicing the Yankees. As it turns out, we had to wait another five years for the Sox/Yankees dynamic to reverse.

Next post Remember When the Red Sox Feared the Yankees?