The Red Sox Have Already Given Us More Than We Deserve. 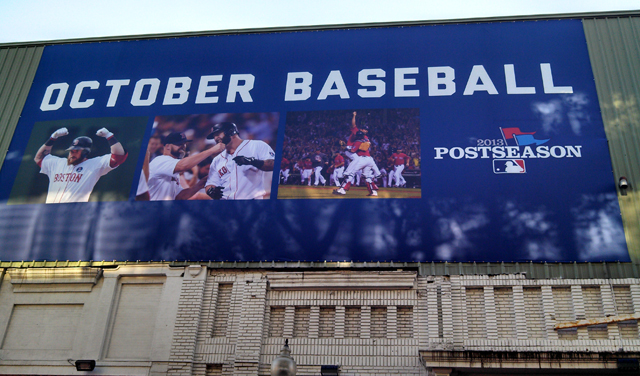 Last night, as I was climbing into increasingly deeper cups of alcohol, watching the Red Sox blow a lead to the lowly Angels, one of my drinking compadres said, “If the Red Sox can’t make the playoffs this year, I’m done.” In response, swift as a soaring but grossly intoxicated eagle, I grabbed said person by the shirt and shook ferociously, screaming, “If that’s all it takes to get you off the bandwagon, little man, I say get the fuck out and good riddance!” Never mind that this person was a seventy year old woman and, in fact, my great aunt Zelda. I needed to make a point. And there’s no time for rational thought when you’re a drunk Red Sox fan trying to make a point.

That point is: the Red Sox don’t owe us a goddam thing. Not after delivering four World Series titles in 15 years.

Listen: I grew up in a time when it was just understood that the Red Sox were a summer fling. Something to keep your mind off death and taxes and August swamp ass. Come September, they promptly folded like deck chairs, ready to be put back in the shed and locked away while other teams battled it out for trophies and champagne. The Red Sox closed the ’80s out with an epic, ball-stomping World Series loss to the Mets and getting shivved by Dave Stewart and the A’s. They spent the ’90s getting stuffed into lockers, culminating in a miserable pantsing by the Yankees in the 1999 ALCS.

The breaking point, of course, was the 2003 ALCS. Grady Little. Aaron Boone. An unstoppable freight-train of failure. For a few precious moments, I was feeling it. When Ortiz went yard off David Wells. When we carried a three-run lead into the bottom of the eighth. But it turned out to be more of the same. A barrel of horseshit tossed on your birthday cake, the fat kid sitting on your sack lunch, the quarterback stuffing you in your locker, your dream girl telling you she really just wants to be friends. Suddenly, everything my dad told me was true. Some women are worth fighting for. The best thing you can teach yourself is how to change a spare tire. And the Red Sox are going to break your heart.

But 2004 wiped it all away. Suddenly sunshine and banjos and Sophie Turner and Margot Robbie arguing over who’s gonna take me home. Free beer and hamburgers for all. And the feeling that you’re not gonna have to go to bed shaking and angry and cursing the Gods. If I had any prayers left before the 2004 ALCS, I sure as hell used them all up during that messy, exasperating and ultimately exhilarating blur. I left it all on the table for that World Series. And when I’m on my deathbed years from now (hopefully) and begging for a few more days, if God reminds me of how I said I’d never ask for anything else if we got that 2004 trophy, I’ll gladly nod, close my eyes, and embrace the big sleep.

Over the last fifteen years, we’ve won more World Series titles than any other team. That’s four god damn trips to the promised land. And twice, we stepped on the Yankees’ nuts to get there. The thought of the Red Sox doing that, let alone winning it all, was unthinkable two decades ago. Today, we practically expect it as soon as the team breaks camp.

So I’m sorry if I have little patience for anyone who’s ready to crucify the team when they can’t make the playoffs. The fact is I’ve been to the promised land four more times than I ever thought I’d be in my lifetime, and for that, I will always be thankful.

That’s not to say that I don’t still feel the sting when we get shut out of postseason baseball. But that angry young fucker who flipped tables and punched walls when October moved on without us is thankfully long gone. These days, I’ve got plenty of good memories to keep me warm until the new season — and the very real possibility of another World Series — is upon us.