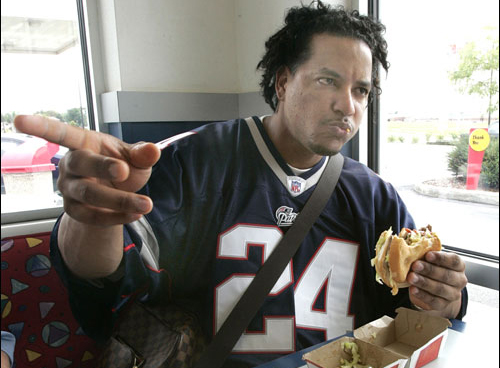 The late 90s were not a good time to be a Red Sox fan, unless you happened to enjoy teams that regularly ripped your heart out of your chest and drop-kicked it down Comm Ave. These were wretched, wretched times that were redeemed solely by the arrival of Pedro Martinez by the tail end.

In the offseason of the 2000 season, in the wake of another embarrassment at the hands of the Yankees in the 1999 ALCS, Red Sox ownership apparently flipped the “fuck this” switch and decided that if they were gonna have a pitcher of Perdo’s caliber aboard, they might as well surround him with players a few steps up from, say, Wilton Veras and Midre Cummings. The first target was prized free agent Mike Mussina, but he ended up opting for a ring-free life in New York. The “consolation prize” was that other big free agent, Manny Ramirez.

You have to understand that before Pedro and Manny were signed, this was the place where if a big name showed up at all, it was simply to stave off death or retirement and pad their bank accounts a little bit more. Guys like Jack Clark and Andre Dawson and Frank Viola and Rickey Henderson and Dante Bichette and, god love him, Bret Saberhagen showed up at Yawkey Way seemingly out of any other options, put on the laundry and went to work not winning us a World Series.

Manny, on the other hand, was a big deal. A three-time All Star coming off a couple of the best years of his career and a genuine home run masher. Add his bat alongside Nomar, with Pedro on the hill? Suddenly, this was starting to look like a team that could do some damage.

Yes, there were concerns about the money we threw Manny’s way — $160 million. But all that shit flew out the window on Fenway opening day in 2001, when the man strolled to the plate as a member of the Boston Red Sox in front of the home crowd for the first time. We were already down 3-0, thanks to some first inning struggles from Tim Wakefield, but with two men on, Manny delivered the first pitch he saw over the green monster. Honestly, I don’t think there was a more anticipated first at-bat in the previous ten years of baseball at Fenway, and to say that the place went apeshit when he launched that home run is like saying Snoop Dogg enjoys the occasional joint. It was a thunderous ovation that must have rattled windows all the way to the financial district — easily one of the loudest I’d heard at Fenway to that point in my life.

One pitch, one swing, just like that, tie game. Also: an entire $160 million contract justified. And if I knew what was in store for us over the next few years of the “Manny Era,” I probably would have not drank so much goddam beer that day.

Next post Reminder: Baseball is Back and the Red Sox Own Your Soul

Previous post Steven Wright: Guy Least Likely to Be Suspected of PED Use Suspended for PED Use