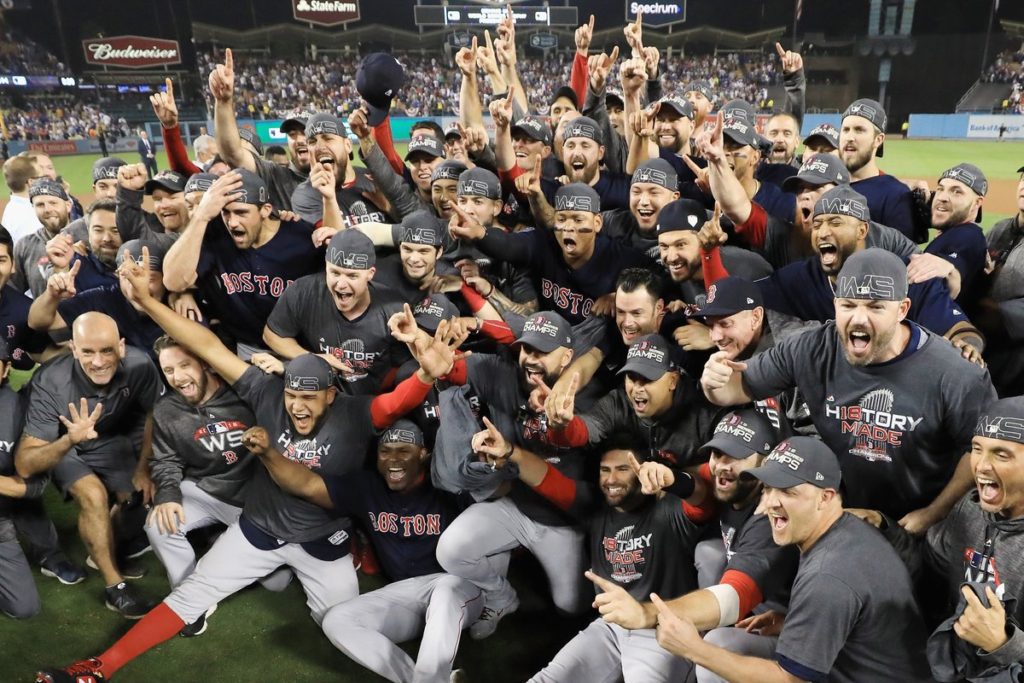 I’m old enough to have Red Sox angst in my DNA. I try to suppress it, but it’s there. In the blood. Keeping me grounded and humble and superstitious when every single fiber of my being was telling me from the first month of the season that the 2018 Boston Red Sox weren’t just the best team in baseball, they were the best Red Sox team of my lifetime.

They broke away from the pack early and pretty much had the division clinched by early August. Their 108-54 record was outstanding. The fact that they went on to go 11-3 in the playoffs was unreal. When all is said and done, the Red Sox won 119 games in 2018 and lost only 57. By any standard, that’s a pretty fucking awesome baseball team.

And they were a team in the truest sense. How else do you explain the way guys like David Price, Steve Pearce, Joe Kelly and Nathan Eovaldi rose up to become the big stars of the World Series, while Mookie Betts, JD Martinez and Xander Bogaerts, the holy trinity of run production for most of the season, became almost non-entities in the last week of the playoffs.

Kelly was Mr. October for the Red Sox, and his postseason line is Koji-esque: 11 1/3 innings, 1 earned run, 8 hits, 13 strikeouts, .186 batting average against and 0 of 4 inherited runners scoring.

Meanwhile Pearce, who looks like a goddam high school gym teacher and didn’t even join our team until late June (and probably would have been eighth or ninth on a list of possible World Series MVP candidates if you made one up in late August) was insane, picking up the slack when JD stopped going yard. To see a journeyman guy like that come up huge on the big stage is just another reason to love baseball.

Lastly, we can’t say enough about David Price and Nathan Eovaldi. Price has never gotten a fair shake in this town, and with good reason: since arriving in Boston he’d never been able to shed his reputation for folding like a deck chair in the playoffs. But this year was different. After a less-than-stellar showing in our only loss against the Yankees in the ALDS, Price was born again hard, winning the clinching game of the ALCS by holding the Astros scoreless through six. He then went on to win Game Two of the World Series, throw a scoreless 2/3 inning of relief in the Game Three marathon, and win the clinching Game Five. Is he gonna take his opt-out and run somewhere else? I hope not, but wouldn’t blame if he did. He proved himself and may want to slip out on top.

All you need to know about Eovaldi is this: in that 18 inning monster that Game Three became, he went 6 full giving up just three hits and one earned run. If those nine extra innings were a standalone game four, he may well have gotten the win. But it wasn’t, and Eovaldi left the mound a broken man after giving up the walk-off. Maybe he went on that night to bury himself in hookers and Chinese food to ease the pain. Also, he may not have. But I wouldn’t blame him if he did. The man earned it.

So there you have it: best team in baseball wins World Series. Fourth title since 2004. An amazing run, and perhaps the start of a dynasty. These are magical times we’re living in, Red Sox fans. Let’s never take them for granted.