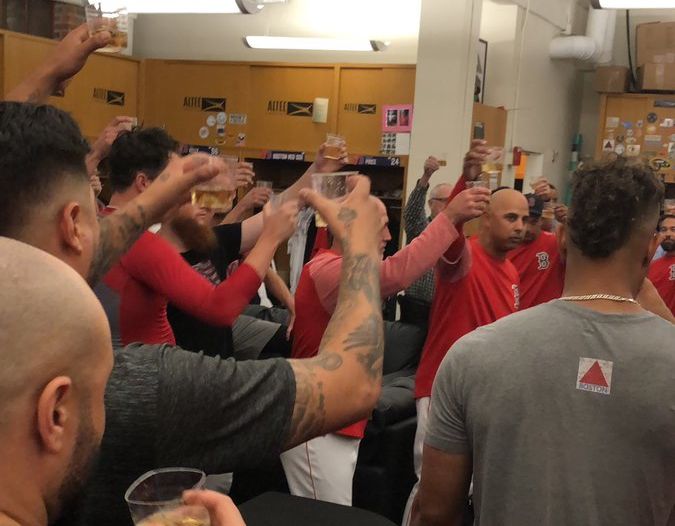 Actually, the Red Sox don’t have 99 problems. They may only just have a couple. One of them is Chris Sale’s arm, which should be fresh and ready to go in October but you just never know. Another is the bullpen, which is a roll of the dice anytime the door swings open. And I still have nightmares of Craig Kimbrel shitting the bed in last year’s ALDS.

But enough with the negative vibes. Last night, the Red Sox won their 99th game and clinched a spot in the playoffs. Another milestone could come tonight when they win their 100th game, and the ultimate exclamation point on the season will be the securing of the AL East title. Barring a full and utter collapse, this is going to happen.

The latest win was another example of how potent that Red Sox offense can be, laying like a snake in the grass for seven innings, then springing out with five runs across the seventh and eighth, including a three-run pinch-hit home run from Brock Holt. And if you ever needed a reason to pray for the Red Sox to go far in the postseason, it should be to see the Holt-Martinez bromance roll on.

The best part of last night’s playoff spot clinch was the understated (as far as we can tell) way the team celebrated. Steven Wright tweeted the photo above, which showed the team engaged in a toast. That’s classy and refined, and it should be that way. There’s plenty of time for running down Boylston in Miller Lite box underwear once the AL title’s been won.

It’s just another gesture that makes me believe in Alex Cora. And I hope they keep the champagne handy to toast that 100th win.

Next post I Lost Faith in the Red Sox for Ten Minutes Last Night. But Now I'm Back.