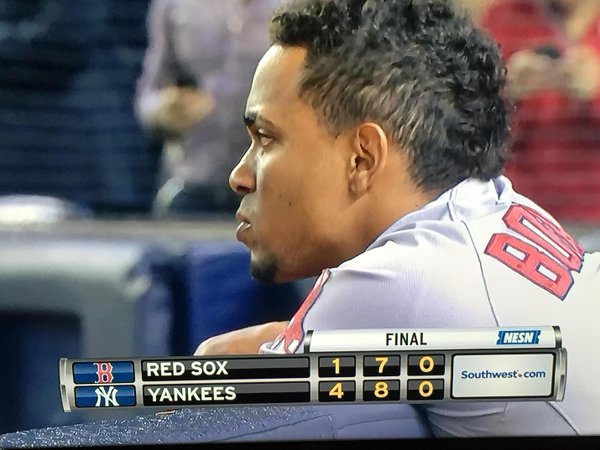 Last year, the Red Sox were in the Bronx when the Yankees clinched the wild card. So Ortiz and Pablo and li’l Xander had to sit there and take it while the Pinstripers jumped up and down and threw Gatorade and sprayed beer and congratulated themselves for sneaking into the postseason under the wire.

A short time later, the Yankees were snuffed out of the playoffs, eliminated in one game by the Houston Astros.

That really should have been punishment enough, but I’m hoping the Red Sox can pile it on a bit tonight. Our magic number for clinching the East is down to one, and if we can’t clinch it at Fenway, my second choice will always be Yankees Stadium.

And why not go nuts? It’s the first time we’ll have the chance to celebrate winning something on Yankee turf since the 2004 ALCS (at least I think it is. I’m far too lazy to look it up). And with Papi heading out the door at the end of the season, why miss the chance to let him go full bear on the New York field, reminding everyone in attendance that he is the main reason we’re living in a New World Order. One in which the Yankees are subordinate to the Red Sox, undoing decades of torment and torture.

Mostly, I just want to see what kind of outfield dance will be done to celebrate winning the division in Yankee Stadium. We are living in magical times, my friends. Sit back, crack a beer and enjoy it.