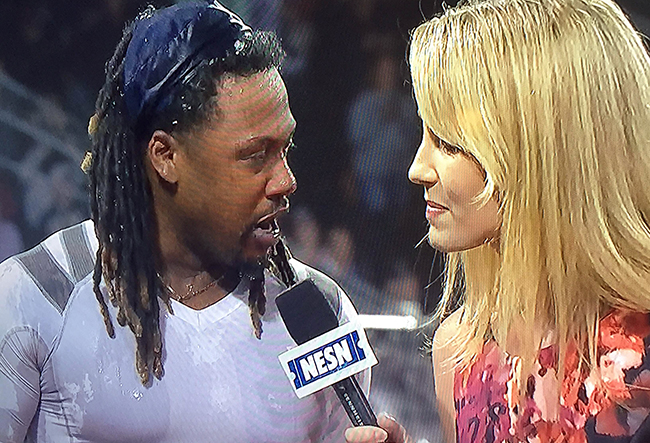 Remember watching the first three games of the 2004 ALCS and feeling nothing but Yankees-inflicted dread and despair behind every door? As much as I hate to admit it, I felt a bit of that angst come creeping back during tonight’s Red Sox-Yankees game. Especially in the bottom of the ninth, when the Sox, who had scored just two runs across their previous 20 innings, found themselves down 5-2. Judging from how listless their bats had looked of late, it seemed New York might close the gap between us to a measly three games.

It didn’t help that the inning started off with an ugly strike-out by pinch-hitter Aaron Hill. It was so ugly, in fact, I wrote this game off, and finished off the last of my beer.

Chris Young got aboard. Then Pedroia. Then an X fielder’s choice left us with two outs and men at first and second. Then an Ortiz single scored Pedroia. Then a Mookie single scored Xander. Then all of a sudden it’s 5-4 and the winning run is at third and Hanley Ramirez stepped to the plate.

You saw that right, folks. Walk-off three-run home run for Hanley Ramirez. Sox take game one of this series, 7-5.

It was the best win of the season, hands down. A win that still doesn’t quite make sense. But it’s got me so wound up, I can’t sleep. And pushing the Yankees a little bit further off the postseason hunt is just icing on the cake.

Previous post Do We Really Have to Worry About the Yankees Again?