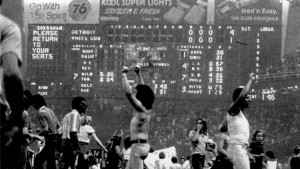 Disco Demolition Night. Yeah, it was an actual event. Yesterday was the 37th anniversary of what has to be the worst “promotion” in sports history. Only the WKRP Turkey Drop rivals it (“As God as my witness, I thought turkeys could fly”) in stupidity, and that was fiction.

In July of 1979 America was a much simpler place. There were no Pokemons running around the city and there wasn’t an app for everything. There was baseball and there was music. The lines were drawn in both arenas. You had Red Sox/Yankees (or Cubs/White Sox) and you had rock and roll versus disco.

So, anti-disco Chicago DJ Steve Dahl decides to stage an event between games of a double-header at Comiskey Park. People were asked to bring a disco album (look it up if you’re too fucking young to know what that is) and he would blow up the lot of them on the field.

The White Sox were 40-46 at the time and not drawing huge crowds. Well, apparently people were more passionate about their rock and roll than they were about their Sox, because over 50,000 people showed up (Comiskey held 44,000). Dahl blew up a giant box of vinyl records…and then things went wrong. You might think it would be the jagged shards of flying Bee Gees records that was the problem. But no, it was people, as it always is.

Thousands of fans stormed the field, ripping up the grass, climbing foul poles, and completely destroying the dugouts. Chicago PD showed up in full riot gear and thirty-nine people were arrested. The second game of the double-header was postponed and eventually forfeited to the Tigers. You can still get shirts commemorating the event.

Now, back to your All Star Game… 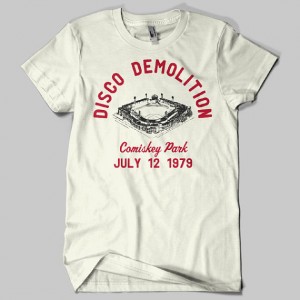 Note: A tip of the cap to 98.5’s “Sports minute” for bringing this to our attention.

Next post Red Sox Highlights from the 2016 All Star Game