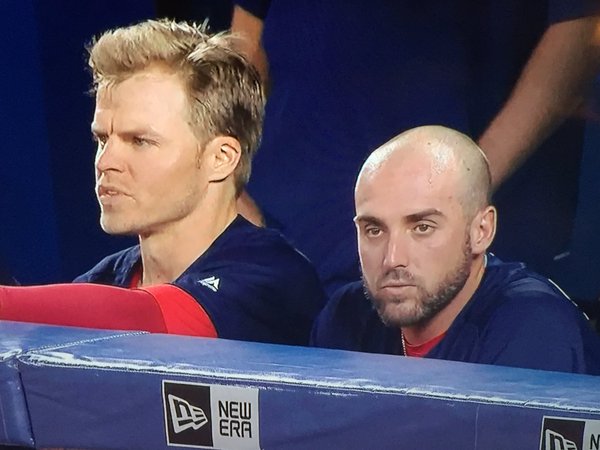 Apparently determined to keep our “after Price, we’re rolling dice” mantra alive, Joe Kelly turned in a performance last night against the Jays that was somehow more disheartening than Clay Buchholz’s start in the previous game. Kelly gave up a run in the first, then went to pieces in the fourth, surrendering six runs, four on a grand slam. He even managed to knock Kevin Pillar on the head before mercifully being lifted (the good news: Pillar was fine and bounced right back up).

Amazingly, even after being left in a 7-2 hole, Kelly’s teammates rallied to save his ass, get the Red Sox the victory and spare him a post-game wedgie. Noe Ramirez, Matt Barnes, Junichi Tazawa, Koji and Craig Kimbrel threw 6 two-hit innings, preventing any further damage while the bats went to work. Our loudest shot of the night came from Brock Holt, who nailed a line-drive grand slam in the sixth:

In other good news, Xander Bogaerts had three hits after an 0-10 start, reminding us that his Aruban blood probably needs the warmer weather (or at least the climate controlled dome air in the Rogers) to push him into Hulk mode. Travis Shaw had another hit and made a tremendous bare-handed defensive play to throw out a runner at first. Ortiz and Hanley each had two hits as well, reminding me of the salad days when seeing “Ortiz” and “Ramirez” side by side in the Sox line-up meant nothing but magic. If Ortiz keeps hitting at this clip, expect the “one more year” banners to be out in full force by the All Star Break.

Look, this game was far from perfect. It did nothing to quell our fears about the starting rotation; if Porcello shits the bed today, then we really do need to start fitting Price for a metal exo-skeleton to ensure his health for the season. As I said before, all this rotation did last season was land us in the basement of the AL East.

But seeing that grit and fight in the team, and knowing that we truly have a shut-the-door closer who can make the ninth inning irrelevant, has me oddly optimistic for early April. When you can withstand a spirit-crushing start like the one Kelly turned in and rally back against your most formidable division opponent, that means something. And it already makes today’s game with Porcello on the hill even more fascinating.

I’ll see you there. Bring beer.