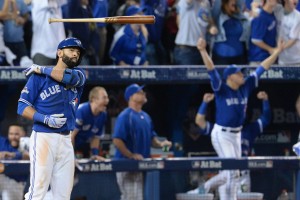 Jose Bautista posted an article on The Players’ Tribune defendingthe now-famous “bat flip” in Game 5 of the ALDS. Before I get into this, let me say that I think the fact that he felt the need to write this is ridiculous. It’s simply another example of internet-created outrage and the trend of finding offense in everything everybody does. That being said, it’s a very well written explanation of something that doesn’t need explaining:

When you’re in that situation, you’re playing a role in a show. I’m not Jose Bautista. I’m the guy trying to be the superhero. I’m coming through. I’m going to make something happen.

When the pitch came in, I turned on it. It was just a natural reaction, just like I’ve done hundreds of times before.

There’s no sound in the world like the crack a baseball makes on the sweet spot of my maple Marucci. You blink on contact. The immediate roar of the crowd lifts your sights to see where the ball is going. Imagine the feeling of watching it land in the seats. How would you feel? What would you do?

There was no script. I didn’t plan it. It just happened.

I flipped my bat.

Isn’t emotion part of what makes sports great? Remember Wide World of Sports – the thrill of victory, the agony of defeat. These games are what players spend their whole lives preparing for, training for, working for. As Bautista points out in his article, there are few that even get to that defining at-bat. And there is no script, there is only joy or agony depending on the outcome. In this case, joy, and he displayed it by flipping his bat. Big fucking deal.

I’m not interested in a game played without emotion. Picture a field full of J.D. Drews moving methodically and robotically through the game. Yeah, that would make for a great spectator experience. If I’m investing my own emotions in the game, I want the players to make that same investment. Flip your bat, point at the sky, jog around the bases enjoying the moment. If a pitcher gets a big strike out, throw a fist pump, let loose a primal scream, live in the moment.

Now, I guess I need to qualify this opinion. The expression of joy is great, but it needs to be in some context. If it’s the third game in April and your team is down 10-0 and you hit a home run, the bat flip is unnecessary. Your team is still losing, what are you happy about? There is a fine line between expressing emotion and showboating to show up an opposing player. I’m fine with erasing that line. Who didn’t love Larry Bird’s trash talk? It was his way of getting into the other team’s head and it often worked. Every time Julian Edelman makes a catch, you see him yapping at the corner that couldn’t cover him. Baseball shouldn’t be any different. If you’re an opposing player, it’s your job to get the batter out. So, as Bill would say, do your job.

Think about Kirk Gibson’s home run in the World Series, punching his fist as he hobbled around the base. Bautista mentions Carton Fisk’s home run in ’75 and him waving the ball fair. These are iconic moments made iconic by the raw show of emotion. And I love it. I stand with Bautista on this one.

Next post MLB Players give back at Players Trust Poker Tournament

Previous post Painless MLB Playoffs: The Joys of Having No Horse in the Race