Champions of the World! 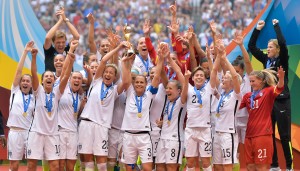 Once again I’m off topic but this has to be written. The USA women’s team brought soccer’s most prestigious title – the World Cup – back to the United States. This is truly a WORLD championship, the US women had to go through the “bracket of death” just to advance, then beating Colombia,  China and Germany to reach the final. That game was over in the first 15 minutes (okay, technically 16 minutes) as the women unleashed their offense and were up 4-0 before Japan knew what hit them. Early in the second half Japan was gifted an own goal to make the score 4-2 but Tobin Heath was having none of that and scored two minutes later to take momentum back.

Three of the goals were on set plays and Carli Lloyd had a first half hat trick. The US women simply dominated in all phases of the game (do I sound like Bill Belichick?). I know most people aren’t soccer fans, but that’s probably because they’ve only watched the Revs or the men’s team where every foul is made to look like the player was shot by a sniper. They are a bunch of floppers and babies that rival LeBron James in their douchiness. The women are badasses and play a much better team game. Twice in the World Cup players banged heads going for the ball and opened pretty bloody wounds. In both cases the player ran to the sideline and had a bandage wrapped around their head and immediately went back in. Meanwhile David Ortiz can’t play first base because he’ll be sore the next day.

Unfortunately none of the player ripped their jerse