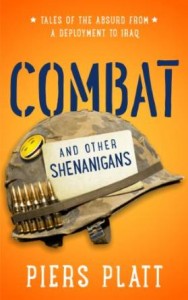 Denton here. Piers Platt has been a long time follower of this site, but much more important, he is a veteran. Piers reached out to me almost a year ago and asked if he could do a guest post to pimp his new book. Seeing as how I suck at life, I completely dropped the ball and straight-up forgot about it. For some reason, maybe because of the holiday, it popped into my head and I dug out the e-mail. In setting up the links to Amazon, I was thrilled to see his book is doing very well.

Take a moment to support a veteran and get this book. You won’t be disappointed.

In October of 2004, I was serving as a scout platoon leader with the 1st Squadron, 4th United States Cavalry Regiment, stationed just outside of Samarra, Iraq.  Our missions included manning roadblocks throughout the nearest town, stopping Iraqi vehicles and searching them for weapons and explosives, and conducting house-to-house clearing operations.

It was frankly fairly boring work, except that the 2004 ALCS was taking place, and being a lifelong Red Sox fan, I was dying to watch them take on the Yankees for some much-needed payback after the previous year’s debacle.  The TVs were all back on our Forward Operating Base (FOB), however, so I was stuck listening to periodic updates over the tactical radio while we were out conducting operations.  It was especially painful to hear that the Sox dropped a seemingly insurmountable three games to the Yankees, losing in characteristically spectacular fashion.  A good friend of mine in our troop, Sergeant First Class Nicholls, was a die-hard Yankee fan, so of course, he called me up on the radio the morning following Game 3.

“Because your ass is about to get swept!”

Miraculously, my platoon was called back to base that evening, and our operational schedule was flexible enough that I was able to watch Games 4 through 7 of the ALCS.  Though the games were on in the middle of the night, my sleep schedule was so out of whack that I adjusted easily and just slept during the afternoons.  After Schilling shut up the raucous crowd at Yankee Stadium with his bloody sock heroics in Game 7, I taped a note to Sergeant First Class Nicholls’ door.

“White 4:  what happened to that broom you were looking for?

As the Red Sox and Cardinals began the World Series, my turn to head home for R&R leave came up, and my commander let me know I would be flying out soon.  Along with a number of my comrades who were also going on leave, I flew to Forward Operating Base Anaconda, where we were led to a holding area and told we would be waiting a day or so for the flight down to Kuwait.  In the meanwhile, we caught up on sleep and spent some time exploring the gigantic post.

FOB Anaconda was a massive converted Iraqi air base that housed somewhere in the vicinity of 22,000 personnel, most of whom stayed on the post at all times because their jobs were in support roles (maintenance, logistics – not combat units like ours).  The post was so large that it had its own bus system, with several different lines, and the clinics on post handed out free condoms, since it turns out that thousands of young, fit, bored people tend to have a lot of sex.  One of our NCOs once got pulled over by a Military Policeman on Anaconda, who proceeded to write him out a speeding ticket.  For combat soldiers used to worrying about improvised explosive devices and ambushes all day, it was hysterical.  I think he framed it when we got back home.

I had missed Game 3 of the World Series while we were in transit from our base to Anaconda, but I quickly found an internet café to check the results, and was determined to catch Game 4 that night, given the possibility of a Boston sweep to win their first championship in 86 years.  The problem was that we were supposed to be present for final roll call before boarding our flight to Kuwait by 7:00 a.m., and since the game was being played in St. Louis, it wouldn’t start until 3:00 a.m. local time.  Worse still, the only TV I could find that would be playing the game was a solid three miles from our R&R holding area.  If the game dragged on, or went to extra innings, I would be faced with a terrible choice: stay to watch my favorite team try to achieve something I had not thought possible in my lifetime, or miss my flight home.

At 2:30 a.m., my alarm roused me, and I caught a bus across post to the recreation tent that had the satellite TV.  The whole series had seemed strangely anticlimactic after the roller coaster ride of the series against the Yankees, but Game 4 turned out to be a nail-biter, and I found myself re-checking the scoreboard as often as my watch.  Finally, the bottom of the ninth inning rolled around, with the Sox clinging to a narrow 3-0 lead.  I watched, my heart thumping, as Foulke took the mound.  I checked my watch.  30 minutes to get back to the tents.

Pujols led off with a single, and the Sox fans in the room started shaking their heads, all of us easily imagining how the tragedy would unfold this year.  Then a pop-out – there was a light at the end of the tunnel.  A strike-out. Could it be?  Finally, Renteria came to the plate, and grounded back to Foulke, who gingerly tossed it to Mientkiewicz at first.  It was over, and I could hardly believe it.  In the tent, the die-hard Sox fans were cheering madly.  We hugged and high-fived, and I think one guy was on his knees crying.  I was choked up myself.  After nine months of fighting a bitter, frustrating conflict with little to show for it, seeing the impossible dream achieved was hugely cathartic for me.  I took a few short seconds to savor the taste of that victory, then grabbed my flak vest and helmet, throwing them on as I dashed out the tent flap.  It was 6:42.

Those three miles felt like the longest, sweatiest, most lung-searing run of my life.  Dripping and panting, I burst into the holding tent, where a soldier was reading off names on an alphabetical list – he was at “M.”  I gulped air, and managed a weak “Here!” when he called my name, before dropping my gear and collapsing on an empty cot next to a friend of mine.

Breathless, I could only nod my head, grinning like an idiot.

This story was excerpted from “Combat and Other Shenanigans: Tales of the Absurd from a Deployment to Iraq,” by Piers Platt.  The book is available on Amazon (http://www.amazon.com/Combat-Other-Shenanigans-Absurd-Deployment-ebook/dp/B00INKEXNO/) and all major e-book retailers.  You can follow Piers on Twitter (https://twitter.com/piersplatt) and Facebook (https://www.facebook.com/piers.platt).