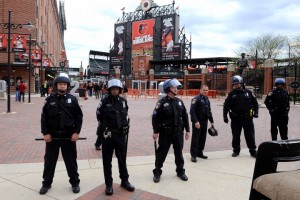 Well, baseball sort of goes on. For the first time in history, two Major League teams played a game in front of zero fans. Whether you call it protests or riots, the civil unrest in Baltimore succeeded in doing what two World Wars and the 9/11 terrorist attacks could not: prevent fans from going to a baseball game.

If you’re like me, baseball is an escape. It eases the mind after a crappy day at the office dealing with the stupidity du jour. Somehow, no matter how your favorite team is playing, baseball has the power to make you forget the bad stuff, to bring you back to simpler times. Seeing police in riot gear and a ball game being played to empty stands ruins that.

We don’t get political around here, hell, most of the time we don’t even get sensible. But these are sad days. Our thoughts and prayers are with all those who need them, black or white, police or civilian. Here’s hoping for a full stadium.

Next post Mookie Betts Is Kinda Good at this Outfield Thing