Clay Buchholz and the World’s Most Dramatic Umpire 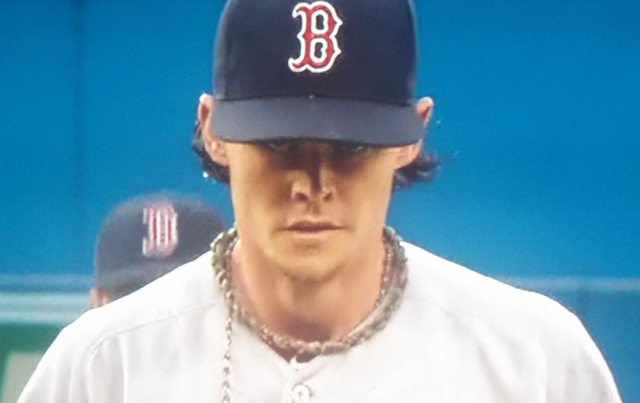 Remember that guy named “Clay Buchholz” who was our single most effective pitcher out of the gate last season? That guy showed up again last night at Skydome, working 8 solid innings and giving up just 2 hits and no runs. Of course, once the ninth inning hit, we were hit with a sharp reminder that this is 2014, not 2013.

After getting the first out, Clay let the next three batters reach — why he was kept in long enough to do that is part of The Riddle of the Farrell — and then anti-Koji, which is what this 2014 version of Uehara has become, let all three runs in to tie the game. And it was done in the most comedic and painful way possible, complete with Brock Holt and Dustin Pedroia getting their Moe and Larry on and literally running into each other.

It was an almost perfect encapsulation of what this season has become — fleeting sparks of promise followed by a 500 pound dude stepping on your nuts. Thankfully, however, the Red Sox came back to win this one, thanks to some Holt base-stealing and more timely hitting from Cespedes.

The key takeaway here, other than that we may have broken Koji with our 2013 postseason run, is that the guy we need Clay to be is still in there somewhere. I hope he drops by more often. It was also good to see the Sox finally embrace the role of spoiler — something I hope keeps up as we stagger through our AL East rivals.

Oh and in case you missed it, last night’s home plate ump was clearly channeling his inner Enrico Pallazo. Check out these killer moves, right out of “20 Minute Abs”: