Red Sox Trade Jake Peavy. But Who Gets Chief? 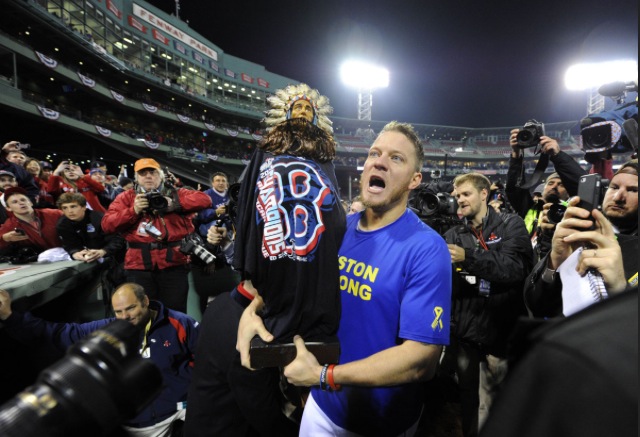 We knew it was coming, but it still bummed me out a bit to see Jake Peavy officially dealt from the Sox to the Giants today.

Yes, the guy hadn’t won a game for us since April, but his performance to date could be the mantra for the entire 2014 team: almost good enough to win, but not quite good enough. Considering his record, you’d have expected a trade to return little more than a couple rakes or maybe a boxed set of “Scarecrow and Mrs. King” DVDs. But Ben actually got the second- and 11th-highest ranked prospects in San Fran’s minor league system: left-hander Edwin Escobar and right-hander Heath Hembree, respectively.

But back to Jake. Although he was only here for one year, Peavy impressed me with how well he meshed with this team and this city. He seemed every bit in awe of what was happening around him as we were as the Sox made their improbable push through last October. He also seemed to sincerely want to give us, the fans, the very best he could.

And as for what he gave us? Well, er… let’s just say that his starts in the ALCS and World Series teetered on the edge of “heart attack inducing.” But as part of a team that thrived on characters, Peavy brought a lot to the table while serving the necessary “in case of Clay Buchholz emergency, break glass” role. He also cemented his place in Red Sox folklore by introducing us to Chief, the cigar store Indian that became the official team mascot, and then buying his own duckboat after the rolling rally victory parade.

Tonight, in Jake’s honor, I encourage you to crack a few beers. And do the “Peavy.”

Next post If the Red Sox Trade Jon Lester, Someone Must Pay

Previous post Time for Red Sox to Embrace the Spoiler Role. Starting with the Rays.